HTC One Max is not a mystery anymore. We have seen the device from almost every possible angle and know what it will bring at the table. Obviously, it’s unofficial and the real version might differ but it will be close to what we already know. Now, a manufacturer has released cases for the alleged HTC One Max before its debut. This is not the first time as we’ve seen something like this some time back when a case appeared on Amazon that belonged to iPhone 5C. 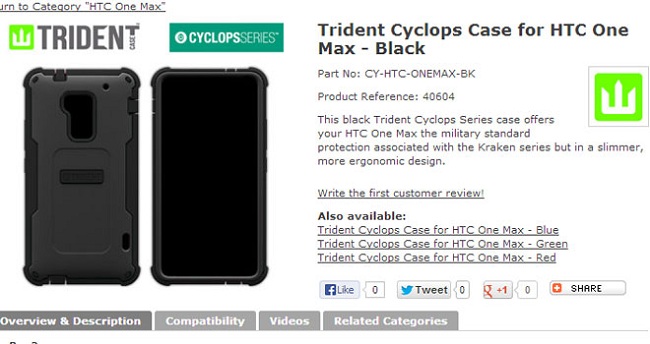 The case is manufactured by Trident that also confirms some of the features of the device. The back panel of the cover also has an empty space for the fingerprint scanner; however, there is a possibility that the case maker released the case based on all the rumors that are circulating on the internet.

The HTC is rumored to have a 5.9-inch display with 1080p resolution, 2GB RAM, Snapdragon 800 SoC clocked at 2.3GHz, 2GB RAM, 3,300 mAh battery, and 16GB internal storage with microSD card slot, and will run Android 4.3 on top of it. Some recent leaks also pointed out that the device will also feature dual-SIM capabilities and will come with support for China Unicom as well.

The device is expected to debut on September 4 at IFA. There is no official announcement by the Taiwanese manufacturer but we do hope that its up to our expectations, and since Robert Downey Jr. is working hard to helpHTC put an end to its struggle.

IFA is just a few days away and we will find out if any such device exists or not.