HP has this week started a campaign to offer its customers the older Windows 7 operating system on new systems available from the HP online store. Offering consumers savings of around $150 and the chance to buy systems with the Windows 7 installed rather than Microsoft’s latest Windows 8 operating system.

Since it launched the Windows 8 operating system has experienced problems trying to combine both its desktop and tablet features for consumers. 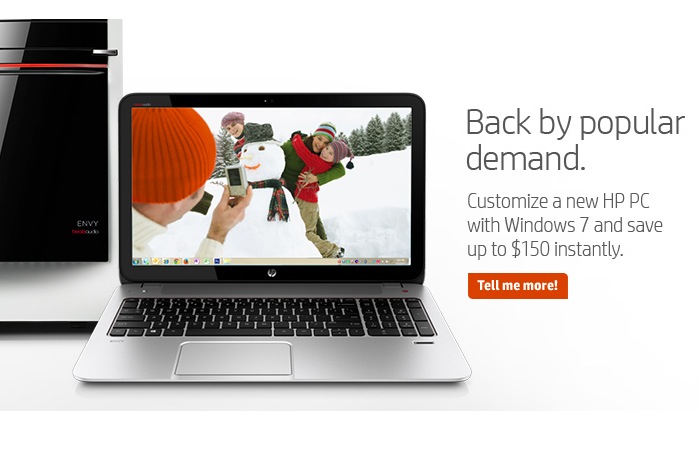 Microsoft seem to have confused consumers with the roll out of Windows 8 core features, that are available via its desktop framework and touchscreen gestures control apps and layout. Late last year Microsoft released a major update to its latest Windows 8 operating system in the form of the Windows 8.1 update to try and correct the perception issues of its latest operating system. But Microsoft might have to wait until Windows 9 is released to correct the issues and get consumers back on track.

Added to the fact that HP is now advertising and openly selling Windows 7 PC system to the public, reinforces that even after a year since Windows 8 launched companies are still not happy with sales figures.

Microsoft confirmed a few weeks ago that even though new retail sales of Windows 7 as a separate software product ended on October 30th, 2013, sales of new PCs with the Windows 7 operating system pre-installed, still as yet do not have an end date. Which is reassuring for consumers and businesses wishing to purchase new Windows 7 systems.