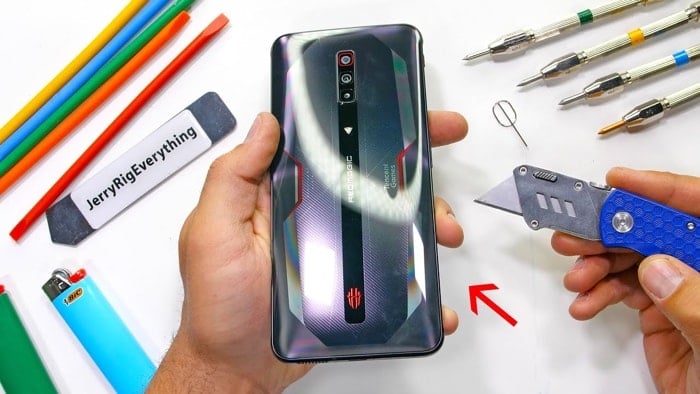 The ZTE Nubia Red Magic 6 is designed to be a gaming smartphone and now we get to find out how durable the device is.

The video below from JerryRigEverything put the Red Magic 6 gaming smartphone through a range of tests, this includes a display scratch test, a burn test and a bend test. Gaming smartphone’s don’t normally do as well as other devices in these tests, lets find out how this device performs.

As we can see from the video of the handset the display on the device scratches at levels 6 and 7, this is pretty much the same for the majority of the handsets available today.

The handset saw some permanent damage to the display in the burn test and it managed to pass the bend test, which is better than many of the other gaming smartphones previously tested.

The handset comes with a choice of 8GB or 12GB of RAM and 128GB and 256GB of included storage, it does not feature an expansion slot for extra storage.

On the front of the device there is an 8 megapixel camera designed to be used for video calls and Selfies, on the back of the handset there is a triple camera setup. The three rear cameras include a 64 megapixel wide angle camera, an 8 megapixel ultrawide camera and a 2 megapixel macro camera, it also comes with an LED flash.

The Red Magic 6 gaming smartphone is equipped with a 5050 mAh battery and it comes with 66W fast charging which can apparently charge the device to 100 percent in just 38 minutes.