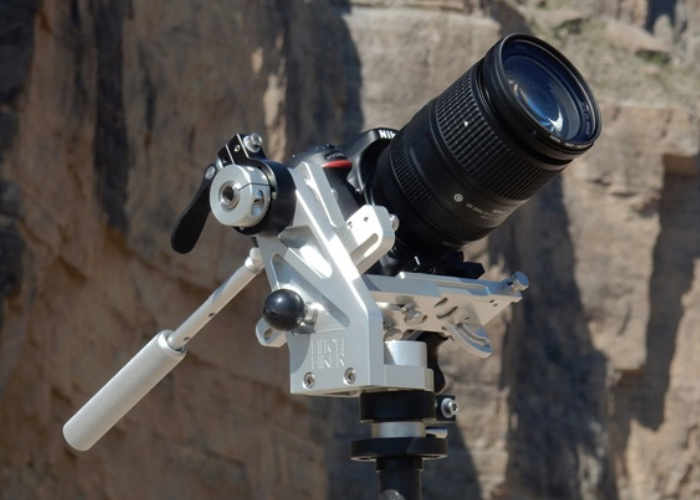 Riddel Precision Instruments based in Austin Texas have created a new lightweight balanced motion tripod head, which they have aptly named the Hitch Hiker.

The new DSLR, spotter scope tripod head has been specifically created to provide smooth uniform motions using precise controls that offer fast accurate photo compositions, say its developers. Watch the demo video below to learn more about the Hitch Hiker and its features.

Are you tired of fighting the gravity flop-over battle that comes with a conventional tripod head? Are you weary of the point-and-clamp then unclamp-adjust-pointing-reclamp routine? And what about the sticky, sloppy or high friction rotations of many conventional tripod heads? And are you frustrated by tripod heads that don’t define left/right and up/down — correcting in one direction while creating an error in the other?

Conventional tripods heads simply are not built for rapid, precise composition of photos in a dynamic environment — especially involving up/down movements. Are you only willing to explore a flat world? The patent-pending Hitch Hiker is a lightweight, balanced-motion tripod head designed for people on the move — perfect for photography; birding; Nature-watching; video; and small telescope and binocular astronomy. The nimble Hitch Hiker is light enough to replace standard tripod heads but enables precisely controlled, all-around rotations that normal tripod heads don’t do well.

High megapixel digital cameras demand steady support for maximum resolution. But the Hitch Hiker doesn’t just provide support. It also provides control — deftly gliding along arching paths requiring simultaneous rotations in both left/right and up/down directions. Follow action wherever it goes with positive control. Let go and aim is maintained on-target — no clamping needed. Stay ready for the next shot. Compose photos rapidly, accurately, and easily.  The Hitch Hiker can even improve composition and sharpness for what might be considered hand-held cameras — especially involving moving subjects.

Visit the Kickstarter Website for full specifications and pledges available, via the link below.