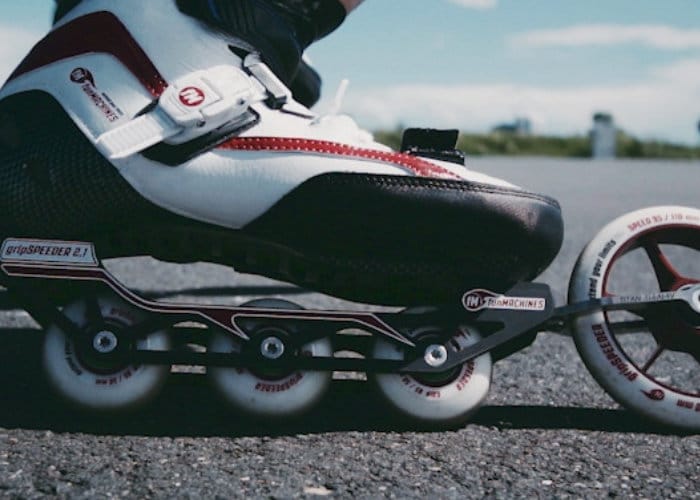 Speed skaters looking for the world’s fastest Speedskate are sure to be interested in the new gripSPEEDER 2.1 created by funMACHINES based in Germany. Watch the demonstration video below to learn more about the skates which have this week launched via Kickstarter to raise the €40,000 required to take them into full manufacture.

The gripSPEEDER is the first Speedskate equipped with a real chassis It weighs just 277g, equipped this with two ultra-light, relatively hard speed wheels in the front and rear, mounted on a lightweight suspension fork constructed from titanium and finished with three lightweight soft grip wheels in the middle you have the ultimate racing skate, according to its developers. “There were always only two possibilities for skaters. Either they opted for higher speed and renounced better grip or the other way around. However, that means one decisive factor was always missing. By developing a whole new technology according to international CIC standards and the World Federation F.I.R.S, we combined more speed and more grip into one skate.”

The gripSPEEDER Starter Set is now available to back for early bird backers priced at €949 with shipping expected to take place during December 2018 if the Kickstarter campaign is successful. For more details and full specifications and a list of all available pledges jump over to the official crowdfunding campaign page by following the link below.