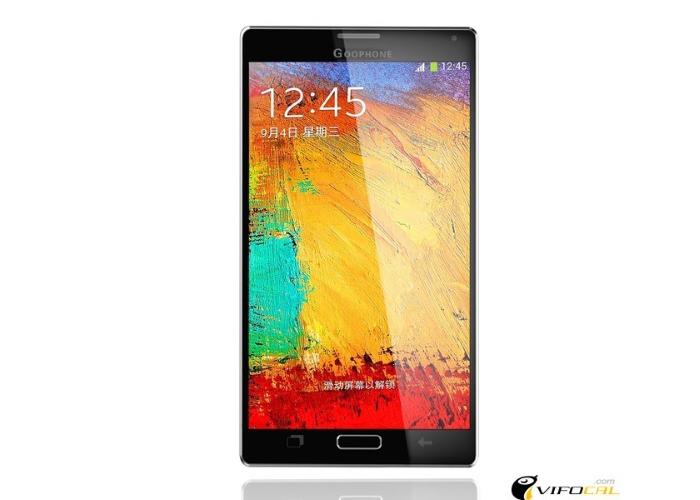 From the past few weeks, the Samsung Galaxy Note 4 is all over the rumor mill with the device expected to see the light of the day next month at Samsung’s Unpacked event in Berlin.

If you can’t just wait for the device, there’s a Samsung Galaxy Note 4 clone already up for pre-orders — the Goophone Note 4. Goophone is not a new name in the Chinese market, the manufacturer released cheap clones of flagship devices from several other OEMs as well.

Not too long ago, the company released the HTC One M8 ahead of its official announced based on the leaked images and schematics. And now, they’ve done the same with the Samsung Galaxy Note 4, as shown above.

Because it’s a clone doesn’t mean that it doesn’t feature decent specifications. GooPhone Note 4 comes with a pretty decent set of internals, rocking a 5.7-inch display sporting a resolution of 1920 x 1080 pixels, with an octa-core MediaTek chipset clocked at 1.7GHz.

The device also features 3GB of RAM and 16GB of internal storage coupled with a microSD card slot. As far as the photography capabilities are concerned, GooPhone Note 4 features a 13MP rear camera as well as a 5MP front-facing camera.

Other features include WiFi, Bluetooth, microSIM support, a 3,200 mAh battery and runs Android 4.4 KitKat as its operating system out of the box.

The listing doesn’t mention the price, but it’s set to begin taking pre-orders from 15th September.