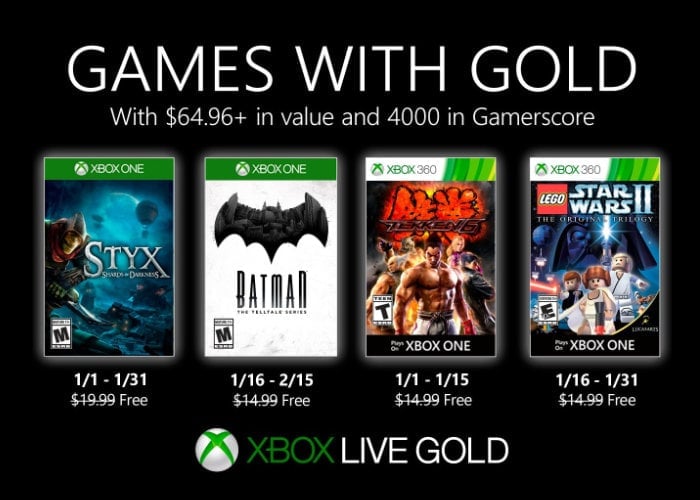 Microsoft has today confirmed the free Xbox games that will be available to subscribers of their Xbox Gold service during January 2020. Dean Shimabukuro, Sr. Marketing Program Manager, Xbox has taken to the official Xbox News site to reveal more details.

“In January on Xbox One, sneak and plunder as a goblin thief in the fantasy stealth game Styx: Shards of Darkness and then don the cape and cowl to become the Dark Knight in Batman: The Telltale Series. On Xbox 360, and Xbox One via Backward Compatibility, enter the King of the Iron Fist Tournament in Tekken 6 then play through an epic Star Wars saga in the classic puzzle adventure title LEGO Star Wars II: The Original Trilogy.

All games will be available exclusively for Xbox Live Gold members for a limited time as part of Games with Gold. With Xbox Live Gold, you get the most advanced multiplayer service, free games, and exclusive member discounts on games in the Microsoft Store — get Xbox Live Gold today to get in on the action! Pro-tip for all of you Xbox Game Pass Ultimate members, this means you too. We’ve got four more games for you to play.”