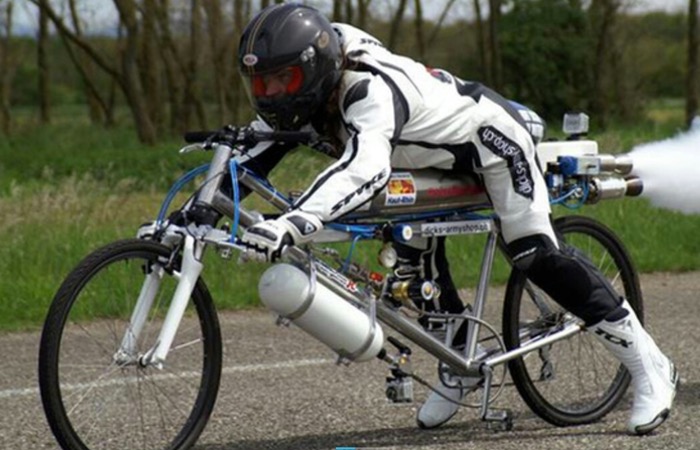 Frenchman François Gissy has built a rocket powered bicycle which he has used to set a new world record reaching a speed of 333 km an hour or 207 mph.

On November 7th of 2014, on the famous Circuit Paul Ricard located at Le Castellet in South of France, François Gissy reached the incredible speed of 333 km/h on his rocket powered bicycle.

The rocket bicycle has been designed by friend Arnold Neracher and can travel the quarter mile in less than 7 seconds reaching 0-60 in just 4.8 seconds and generating about 1.96 Gs worth of acceleration, check out the video below to see the world record-breaking attempt carried out. The Frenchman explained in an interview :

“The bicycle is pushed forward by a rocket thruster. It’s a variant of downhill riding, like on a speed skiing slope, which is relying on a gravity engine. Except that the rocket-propelled variant is much ballsier.

Now the bicycle is equipped with a cluster of three small thrusters instead of two. The fuel is highly concentrated hydrogen peroxide. With this setup I have reached 333 km/h in 4.8 seconds. The thrust was 4.5 kN, which is equal to 416 kW of power at 333 km/h, which is a lot on such a skinny machine…”

For more information on the new record breaking run jump over to the Gizmag website via the link below for an interview with Frenchman François Gissy.