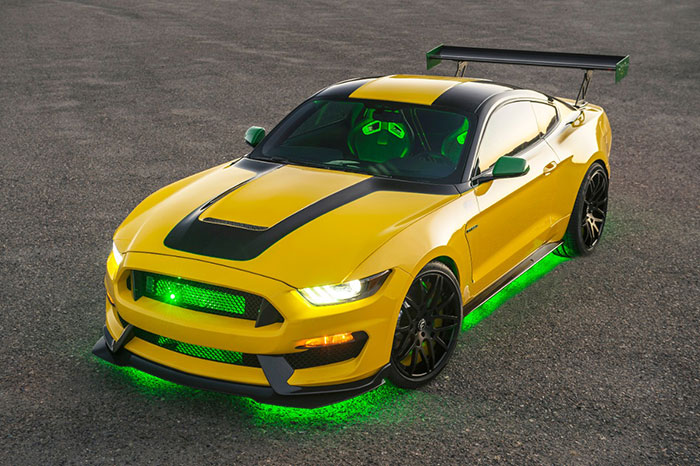 I am a big fan of Ford and Mustangs in general and the GT350 specifically. It pains me to say that the customized ford GT350 dubbed “Ole Yeller” is ugly. I can totally dig the yellow and black paint and big wing on the rear. What bothers me is the green lighting and trim.

The lighting cheapens the look of the car making it look like a set prop from a low budget Transformers knockoff. The design of the car is meant to celebrate something else very cool, a North American P-51D Mustang fighter plane that was used as the pace and safety plane at the Reno National championship air races.

The not so attractive GT350 will be auctioned off with proceeds benefiting the EAA youth education programs including the Young Eagles. Ford has donated enough special Mustangs over the years to raise $3 million for the EAA.

“This year’s one-of-a-kind Ford Mustang honors two aviation greats, the iconic and historic P-51D Mustang fighter plane, and highly decorated fighter pilot, test pilot, and air show performer, Bob Hoover, who is referred to by many as one of the greatest pilots ever to have lived,” said Edsel B. Ford II, a member of the Ford board of directors. “The Shelby GT350 Mustang, with its nimbleness, speed and aerodynamics, provided us with the perfect platform to create this tribute to the P-51D aircraft.”