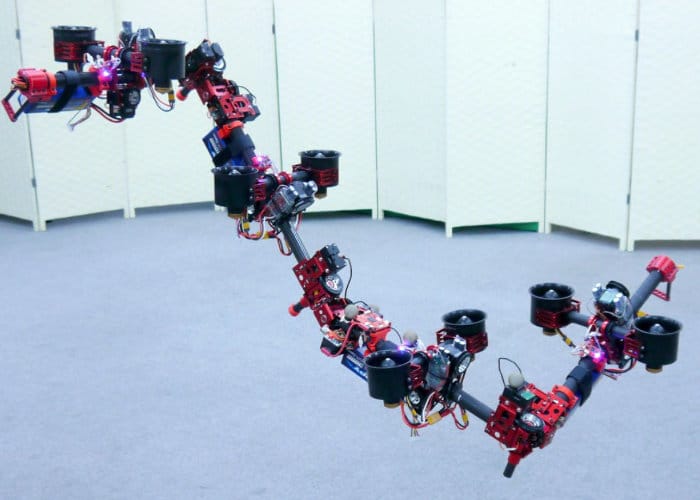 Researchers at the University of Tokyo’s JSK Lab have created a new Dragon drone that can change shape mid flight. Watch the video below to learn more about the Aerial Robot Drone Dragon which comprises of several smaller drones capable of transforming into different shapes on the fly. The name of the drone is actually an acronym, Taken from its longer name the “Dual-rotor embedded multilink Robot with the Ability of multi-deGree-of-freedom aerial transformatiON,” or DRAGON for short.

Moju Zhao, an assistant professor at the University of Tokyo explained what the team of researchers have planned for the future. “We will [next] move forward to design a ‘multi-legged’ model with our basic link module. Then the robot can not only fly, but also walk on the ground. This can benefit us in terms of the energy efficiency,” he said. “Such autonomous decision about locomotion according to the environment is very interesting research. Our ultimate dream is to achieve the flying humanoid, like an unmanned Iron Man.”

Each of the small drones that make up the larger Dragon are individually powered by a pair of ducted fans that can be adjusted to vector thrust in almost any direction. The entire drone is powered by a battery pack positioned along the spine of the drone that is capable of providing up to 3 minutes of flight time. For more information follow the links below.