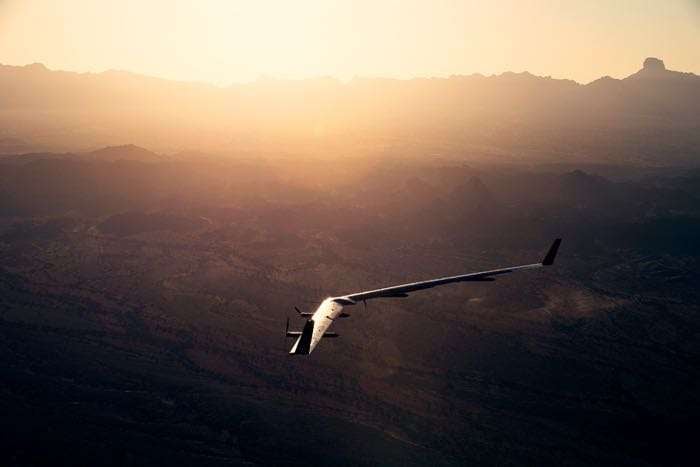 Facebook has announced that it solar powered Aquila drone has made its second successful flight and the drone flew for a total of 1 hour and 46 minutes and then landed.

The company has made a number of modifications to the Aquila drone since its first flight, this includes adding spoilers to the wings, modifying the software, adding more sensor and more.

This second flight was all about data. We flew lengthy test points at constant speed, heading, and altitude to measure the airplane’s drag. The data from these “trim shots,” as they’re called, will be used to refine our aerodynamic models, which help us predict the energy usage and thus optimize for battery and solar array size. We also undertook extensive instrumentation of the airplane’s structure, adding hundreds of sensors to the aircraft to understand how Aquila’s shape responds to flight in real-time. These included hundreds of strain gauges and three-axis inertial measurement units (IMUs.) These tools serve to verify and refine our structural model, which predicts both the static shape of the airplane — designed to be very flexible to respond to wind gusts and maneuvers.

Throughout the flight, we also continued to verify the drag created by new “spoilers” that we added to Aquila at various angles. Spoilers are movable surfaces on the wing of an aircraft that help create drag to reduce speed and decrease lift. We also tested the two radio links’ signal strength from various aspect angles.

You can find out more details about the Facebook Aquila drone over at Facebook’s website at the link below.