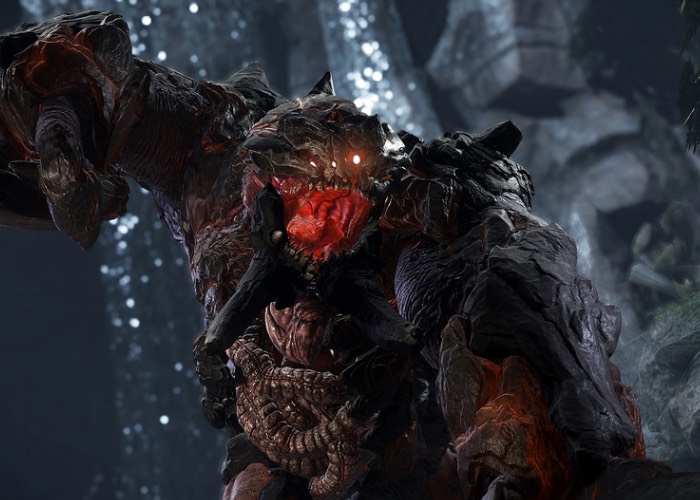 Today more details about the new monster and Hunters that will be arriving later this month to the new Evolve game had been divulged providing information on the game’s new Behemoth monster and Torvald, Crow and Slim Hunters.

The new Evolve in-game characters will be available to play on PlayStation 4 and Xbox One consoles from March 31st and play differently to anything else in the game so far, says its developers.

The new Evolve Behemoth monster is free for those who pre-ordered the Evolve game from participating retailers, and is also available separately.

Behemoth is a tank of a Monster that becomes a giant, destructive boulder and rolls through the environment for quick traversal. He has the most armor, the largest pool of health, and packs the biggest punch of any Monster in Evolve, making Behemoth extremely dangerous in close quarters. While he is the slowest of any Monster, his abilities allow him to control the movement of his opponents by trapping, stunning, or pulling them towards their demise.

The four new Evolve Hunters characters are available for purchase individually or together as a part of the Evolve Hunting Season Pass.

Sunny has a history with the Hunters: she previously worked with Abe and Parnell before the team arrived on Shear. As a support character, Sunny’s job is to protect the team. Her primary weapon is a Mininuke Grenade Launcher, which packs more punch in a single projectile than any other hand-wielded weapon in the game. She can deploy a Shield Drone to protect teammates while she fights, and she has a Jetpack Booster to use on teammates to quickly fly them away from trouble.

Torvald is a cyborg out for revenge, and he has one job: deal as much damage to the Monsters as possible. At longer ranges he’s a threat with his back mounted Mortar Cannons, but he does the most damage in close quarters. Torvald’s Shrapnel Grenades pepper the target with weak spots, and his Autofire Shotgun follows up with multiplied damage.

Crow’s job is to locate and contain the monster. Gobi, his pet Batray, scouts ahead looking for the Monster. Once the Monster is located, Crow has a couple of new Trapper tricks up his sleeve. His Stasis Gun can be fired in two modes: rapid fire mode slows the monster for a very short amount of time, while a charged shot slows the monster for a longer period. His Kinetic Long Rifle can also be fired in two modes: rapid fire deals the most damage per second, but a charged shot bypasses a Monster’s armor entirely, digging into its permanent health pool.

Slim’s DNA was genetically modified, so he joins Bucket as the only non-humans on the Hunter team. Slim is a combat medic tasked with keeping the team alive. The more damage Slim does with his Leech Gun, the quicker he can use his Heal Burst, which has the widest radius of all medics in Evolve. His Spore Cloud Launcher helps him get in close by eliminating the Monster’s ability to smell. And Slim’s Healing Drone can be sent to distant teammates in need of health.