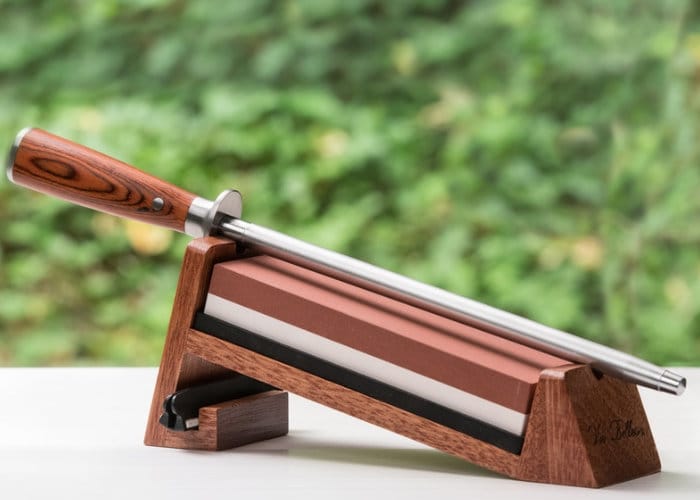 Eventually every knife will require sharpening if used on a daily basis, one solution to help keep your knives as sharp as is the Vie Belles professional knife sharpening system. Offering unbeatable strength and exceptional performance kit has been specifically designed to put the perfect edge on your knives. Watch the demonstration video below to learn more about each component of the knife sharpening block which was this week launched via Kickstarter with early bird pledges available from £75 or roughly CAD$130.

“It is often recommended to keep your knives sharp because a sharp knife is safer to cut with than a dull one. A dull knife’s blade requires more force to cut through items. And as you compensate for its blunt edge by applying additional force, the chances of slippage are increased, which can lead to injury.” The knife sharpening kit offers everything you need to keep your knives sharp and consists of :

“If you use your knife frequently, then it is advisable to use a honing once a week to keep its edge sharp and ensure your own safety. Once the honing no longer has an effect on the knife, a Whetstone should be used to produce a new cutting edge. Alternatively, you can tell if your knife is sharp enough by putting the blade to the paper test by laying it against the top edge of a folded sheet of paper. If the knife slices through cleanly, then it is sharp enough. If otherwise, it requires sharpening.”