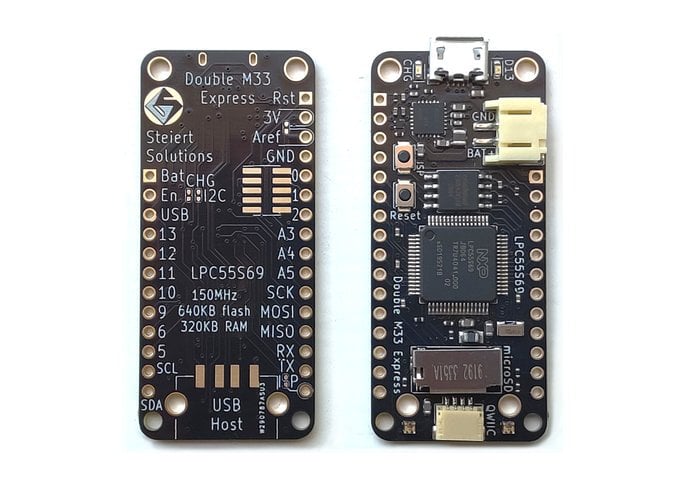 A new open hardware development board will soon be launching via the Crowd Supply website offering developers, makers and hobbyists a feather-compatible development board for the LPC55S69 Arm Cortex-M33. On the successful completion of its crowdfunding campaign, its creators will publish all the Double M33 Express design files making them available for public use. The development board has been created to make life easier for anyone who’s project relies on the many capabilities of the USB standard, say its developers.

“This open hardware board is designed to bring more USB functionality to the feather ecosystem by taking advantage of both USB interfaces of the LPC55S69. Its high-speed interface is associated with the USB Micro-B connector, which serves as the board’s primary interface, while its full-speed interface is wired up to a USB Type-A socket footprint, on the back of the board, that can be used to attach peripherals. Both ports are device/host capable, but you may need to adapt the connectors. The LPC55S69 has plenty of internal SRAM and a second core to help it keep up with higher data rates.

We designed Since a USB host needs to provide power, we included a switching charger with reverse-boost capability. As a result, Double M33 Express can not only charge large batteries more quickly, it can generate 5 V for USB peripherals even when disconnected from a power source.”

Specifications and features include: