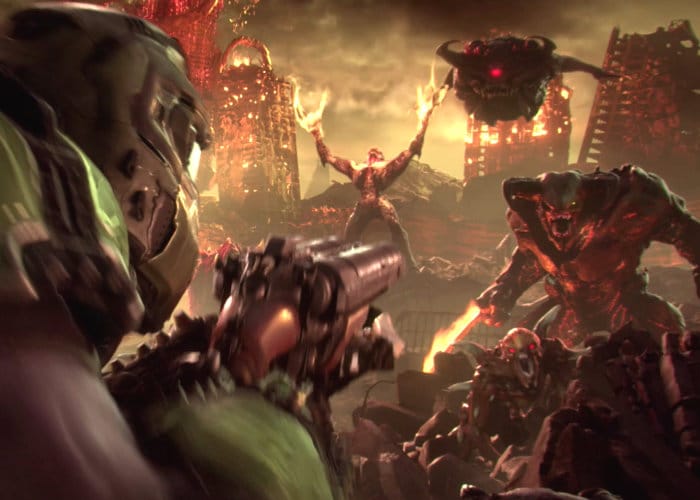 Bethesda first officially unveiled and announced the new DOOM Eternal game last year during E3 2018. Now the company is returning to E3 this year and has teased a new DOOM Eternal trailer ahead of this year’s E3 2019 Bethesda showcase presentation.

To re-cap DOOM Eternal is the upcoming sequel to the 2016 DOOM game, once again offering a first-person shooter developed by id Software and published by Bethesda Softworks. When DOOM Eternal officially launches it will be available on PC, Nintendo Switch, PlayStation 4, Google’s new streaming Stadia game service and Xbox One.

The fifth main title in the DOOM series will once again take players to hell as the Doom Slayer, an ancient warrior who battles the demonic forces of Hell. Using an assortment of weapons including Combat Shotgun, Super Shotgun, Heavy Cannon, Rocket Launcher, Plasma Rifle, Ballista, chainsaw and the “Crucible Blade” energy sword.

Bethesda’s E3 2019 press conference will take place on June 9th 2019 at 5:30pm PT and is being streamed for your viewing pleasure via Twitch. As soon as a longer trailer and more details are released we will keep you up to speed as always.

“What you interfere with now is bigger than you can imagine.”

DOOM Eternal at the Bethesda #E3 Showcase, live on June 9 at 5:30pm PT. https://t.co/wbaEAaAxjy #BE3 pic.twitter.com/qSwOHmPUJV