A new Game Blaster sound card has been created and launched in a partnership between Creative and ASRock. The new Game Blaster card will be shipped by ASRock but will bear the Creative logo and “Blaster” on the outside.

The new Game Blaster has been designed to combine two technologies into a single board, taking the Creative Sound Core3D and Broadcom Gigabit Ethernet LAN and forging them onto one card. 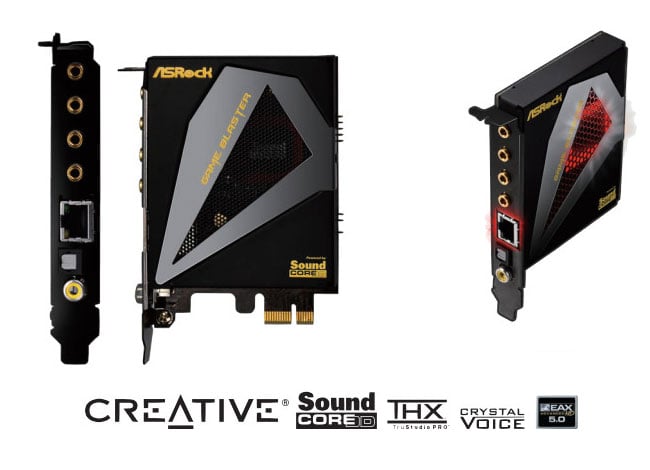 The new Game Blaster card is also fitted with CrystalVoice filtering technology, EAX 1.0-5.0, THX TruStudio PRO, together with a new Scout Mode, which has been created to let you to hear enemies from further away, and give you an edge over competitors whist gaming.

ASRock will be bundling the new Game Blaster sound card with its X79 Extreme9 and X79 Extreme6/GB motherboards. But no information has been released was yet if the Game Blaster will ever be released as a separate stand alone card to purchase. ASRock explains:

“Designed for performance gaming, ASRock Game Blaster also supports the state-of-the-art Scout Mode technology. It is a proprietary technology that allows you to hear your enemies from further away, giving you a distinct tactical advantage in combat,” – “With Scout Mode, ASRock Game Blaster facilitates faster access in the heart of battle and allows gamers to get precise control to elevate their games.”