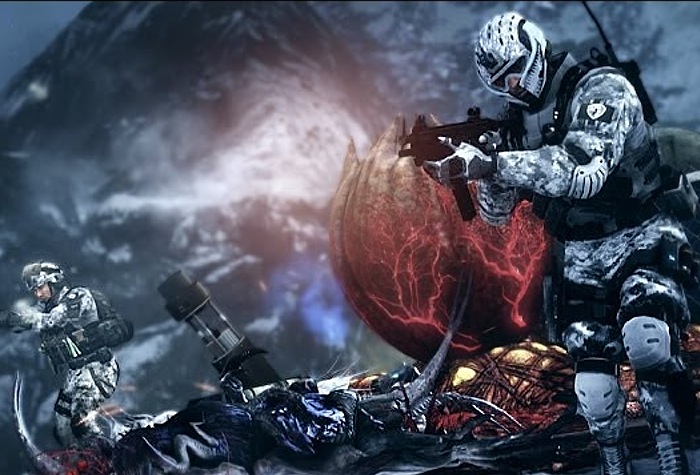 This week the Major nelson website has has published new details about the third DLC pack soon being launched for Call of Duty Ghosts, entitled Invasion. Invasion arrives next week first on Xbox LIVE from June 3rd 2014

The Call of Duty Ghosts Invasion DLC includes four new multiplayer maps and the next highly anticipated instalment in Extinction’s four-part episodic story the Awakening. Check out the new trailer after the jump to whet your appetite.

The new multiplayer maps within the Call of Duty: Ghosts Invasion DLC include :

DEPARTED – Set in a rural Mexican town amidst the Dia de los Muertos (the Day of the Dead) celebration, this medium-sized map features a classic three-lane design. The decorative streets, back alleys, and festive cemetery have plenty of cover for run-and-gunners, but still features some long-range engagements.

If you complete the map’s unique Field Order, you will unlock the Death Mariachi killstreak. Armed with dual wielding pistols, the Death Mariachi rampages through the map, turning your kills into your own squad mates. Celebrate the dead, just try not to become one of them!

PHARAOH – In an abandoned archeological site of an ancient Egyptian palace, where the pyramids create a formidable backdrop, this medium sized, complex multi-level map includes a collapsing monument, urns full of flesh-eating scarabs, and other surprises.
Within the Egyptian palace, you will battle through different chambers, a throne room, and temples ideal for close-quarters combat and short-range weapons, all under the watchful eye of Anubis, the half-jackal/half-human, protector of the dead. The more adventurous of you will be handsomely rewarded by exploring the deepest secrets of the site.

MUTINY – In a secretive cove on a remote Caribbean island, this mysterious inlet is not your ideal holiday destination. Harboring an eerie pirate hideout – complete with abandoned trading posts and prison cells – you’ll need to focus on speed and stealth as you find your way through the narrow and intertwining pathways.

Mutiny comes packed with many “treasures” for you to discover, such as the map’s unique killstreak – an escort of ghostly pirates who will happily send your foes down to Davy Jones’ Locker.

FAVELA – Favela is a refreshed version of the fan-favorite Call of Duty: Modern Warfare 2 map of the same name. Years later, the favela has seen substantial cosmetic changes – buildings once under-construction are now complete, while others have not aged as gracefully as others with the passage of time, and are now in a state of disrepair.