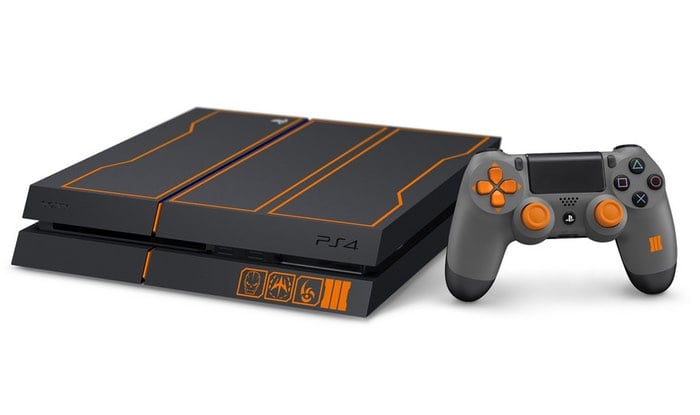 John Koller VP of Platforms Marketing at SCEA has taken to the PlayStation blog this week to announce the launch of the new Call of Duty: Black Ops III Limited Edition PlayStation 4 Bundle that will be available to purchase both online and from retail stores from November 6th, 2015.

As you can see from the image above the new PlayStation 4 Black Ops III bundle, features the Black Ops III ember orange logo on a Jet Black chassis, complete with coloured power and eject buttons.

Together with three emblems on the front of the PS4 console each representing a different game mode. As players might already know : The SOG Skull signifies campaign : the Winslow Accord faction logo is pulled straight from the game’s fiction, representing one of the factions you play in multiplayer, and “the mark” denotes zombies. Koller explains a little more :

The PS4 included has a 1TB hard disk drive, the first of its kind in North America. That’s plenty of room for the DLC — which comes 30 days earlier on PS4 — and saved videos of your best matches. That Share button is going to get a workout, too — our 3.00 system software update for PS4 adds the ability to share short video clips directly to Twitter natively, making it much easier to share your multiplayer feats with the world.

For more information on the new Call of Duty: Black Ops III Limited Edition PlayStation 4 Bundle jump over to the official website for details and links to be able to pre-order from $449.