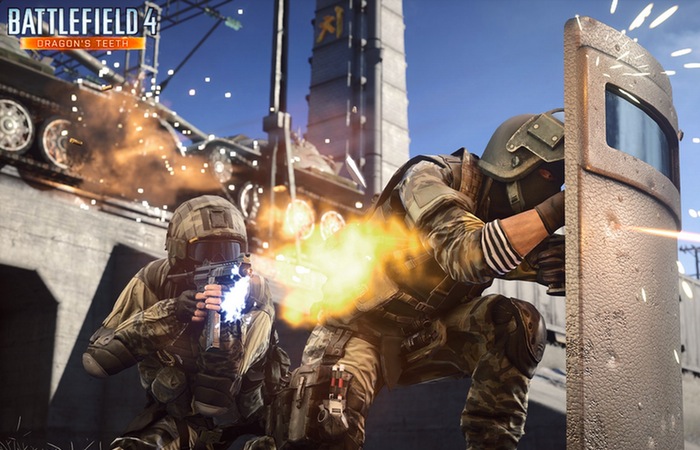 To mark the official launch of the latest DLC, DICE have also released a new launch trailer to whet your appetite for the five new weapons and Ballistic Shield instant cover device available within this update.

The latest Battlefield 4 DLC also brings with it ten new assignments with unique unlocks and a new Battle pickup the R.A.W.R., that takes the form of a remote controlled ground vehicle dripping with weapons for you to use against the enemy. DICE explains :

“Battlefield 4 Dragon’s Teeth drops you into urban combat across Asian cities in four all-new multiplayer maps. Wreak havoc in a floating restaurant or drain the lake opening up for a frontal vehicle assault, all while the battle rages between the modern high rises of Sunken Dragon.

Fight among the huge monuments of despots in the grey concrete Propaganda. Wage wars within the bustling alleyways and upon the rooftops of Pearl Market. Cruise with fast-moving PWC’s on the canals in the pristine park to get the upper hand in the blazing infantry battle of Lumphini Garden.”