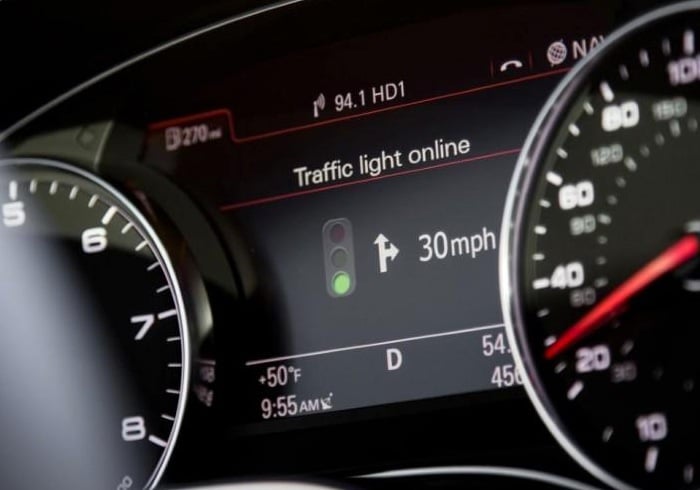 The Audi Traffic Light Recognition is capable of detecting a red light, and counting down the time remaining until the lights change to green. During this time the Audi car can then prime the engine ready to restart five seconds before the lights actually change.

Whilst the car is in motion the Audi Traffic Light Recognition system would also be able to sense whether a car will be able to make it through a green light safely and advise the driver if its thinks the car will not make it in time, braking early, to prevent abrupt stops. Audi explains in their press release this week:

“Audi Online traffic light information harnesses the power of in-car internet in a new way via Audi connect to establish a link between the car and the traffic light network via the central traffic computer in each town or city. It quickly assimilates the automated traffic light change sequences in the vicinity, and on the approach to a set of lights the Driver Information System (DIS) located in the central instrument cluster then shows the driver the speed to select in order to pass through the light during a green phase. It also displays a visual aid using red, amber or green icons.

The fully functional system is now production ready and could be fitted to every Audi model in the range subject to the necessary government legislation. It was actively demonstrated recently on the busy Las Vegas freeways in an Audi A6 Saloon as part of a trailblazing technology display at the Consumer Electronics Show, and comprehensive testing continues in Las Vegas with 50 sets of traffic lights.

Testing is also underway in the northern Italian city of Verona, where some 60 traffic lights covering almost the entire city centre are involved, and in Berlin, where 25 Audi customers are driving cars fitted with Online traffic information that can link up to a total of 1,000 traffic lights in the city. A market launch is currently the subject of intense analysis in the United States”