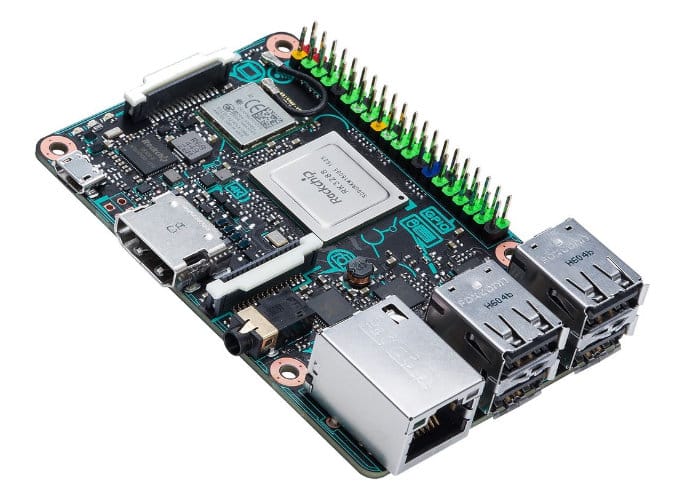 When the ASUS launched the ASUS  Tinker Board earlier this year ASUS published its own benchmarks comparing the new mini PC to a competitor which after closer inspection seemed to be the Raspberry Pi 3. To compare these benchmarks with independent tests YouTube user Blitz City DIY carried out their own tests earlier this year. Check out the independent ASUS Tinker Board vs Raspberry Pi 3 benchmark results below. A few other differences between the two boards apart from their price which at the current time puts the ASUS Tinker Board price of around £45 and the Raspberry Pi 3 priced at around £30.
Watch this video on YouTube.
To re-cap features of the ASUS Tinker Board :
– Rockchip RK3288 procesor
– 1.8GHz ARM Cortex-A17 quad-core CPU
– 600MHz ARM Mali-T764 quad-core GPU
– Realtek ALC4040 audio codec
– 2GB dual-channel DDR3 memory
– MicroSD card slot
– HDMI
– Gigabit Ethernet LAN
– 802.11b/g/n WLAN, Bluetooth 4.0
– 4 x USB 2.0
– Combi audio minijack – headphone/line output and microphone output
– 40-pin GPIO header
– 15-pin DSI
– 15-pin CSI
The KitGuru website explain more about the ASUS Tinker Board vs Raspberry Pi 3 differences :

The Pi 3 has 100Mbit Ethernet, whereas the Tinker Board boasts Gigabit Ethernet. However, both offer just 802.11n WiFi not 802.11ac, 4 x USB 2.0 ports rather than USB 3.0, HDMI video output, an audio minijack, a 40-pin IO header, and two 15-pin serial interfaces, one for camera (CSI) and one for display (DSI). The Pi 3 has Bluetooth 4.1 but the Tinker Board Bluetooth 4.0. So ASUS is trying to match the Raspberry Pi 3 for connectivity and peripheral compatibility, whilst trumping it on the performance of the underlying hardware.