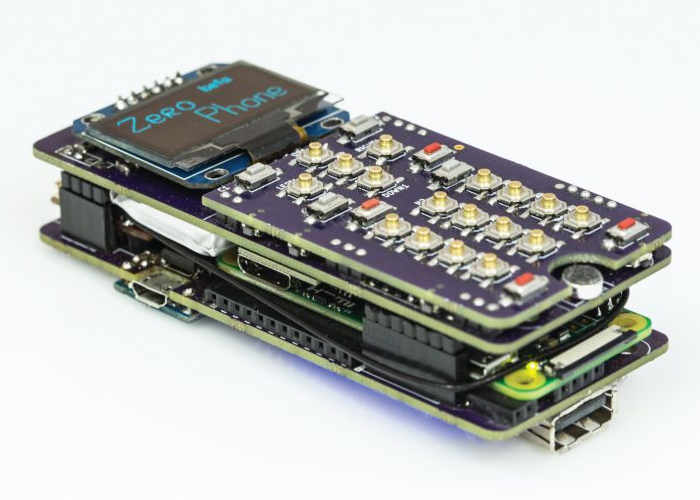 The Raspberry Pi mini PC is an awesome piece of kit to create a wide variety of different projects but one project with featured before here on Geeky Gadgets is the Raspberry Pi phone, which is an ambitious project to build a working mobile phone costing just $50. The ZeroPhone is still currently under development but is getting closer to being a viable product and you can help out if you would like by heading over to the main project page and its Github repository via the links below.

Features of the Raspberry Pi phone include :

• Raspberry Pi Zero in a PCB sandwich
• No proprietary connectors, hard-to-get parts or chips that are tricky to solder
• All the specifications for making this phone yourself will be available
• Python as the main language for developing apps (aiming to add other languages later)
• UI toolkit that makes app development quicker and easier
• Numeric keypad, 1.3″ 128×64 monochrome OLED screen (also supports other screens)
• 2G modem for phone functions, can be replaced with a 3G modem
• WiFi (using an ESP8266), HDMI and audio outputs, a free full-sized USB host port and a MicroUSB port for charging
• GPIO expansion headers for hardware addons and customization
• RGB LED and vibromotor – for notifications

Nowadays, we should be able to assemble a phone from easily available parts, using cheap boards that run Linux, and we should be able to adjust it to our needs – unlike as it is with modern phones, when we have to adjust ourselves to suit the workflow that the phone offers. With ZeroPhone, hackers can finally have smartphones that are going to work for them and not against them, people with special needs will be able to have to have custom-tailored phones, and people that want to protect their privacy will have a phone that respects that.

Technical challenges are: developing PCBs that’d be reasonably feature-packed, but with easily sourceable components that could be soldered without special tools, as well as developing mobile phone software that’d be open, high-quality and highly modifiable to suit any needs people might have. However, much bigger challenges are – building a community of people experimenting with ZeroPhone platform, keeping ZeroPhone open-source and independent of any harmful influences, and experimenting with new ways of integrating smartphones in our lives without having to lose privacy in return.

More details and to build your very own jump over to the Hackaday website by following the link below.