It was reported last month that Asus could be the manufacturer of the next Google Nexus 10 tablet. An image was also leaked yesterday showing the alleged Asus Nexus 10 from PC World inventory system with a £349.99 price tag. Now, another image has emerged showing the purported Asus made Nexus 10 in Currys inventory. 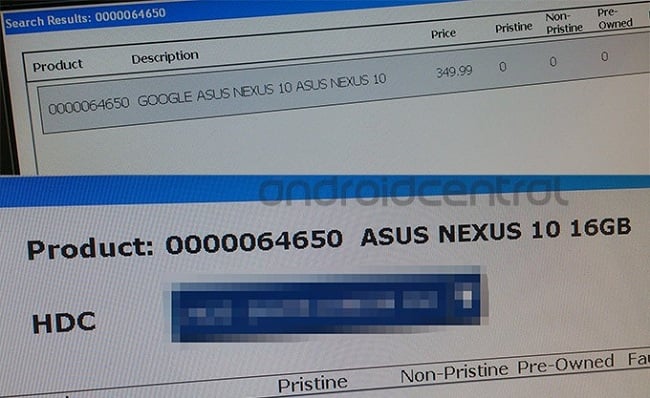 The folks at Android Central received some details from an anonymous tipster from Currys that shows Asus Nexus 10 in their inventory system. The second image shows the same £349.99, but this listing specifically states that it’s for the 16GB model. In case you don’t know, the 16GB variant of the current Samsung Nexus 10 is available for £319.99 from Google Play Store.

Unfortunately, the two leaks haven’t provided any information about the specifications the tablet is expected to bring at the table, but we’re wildly guessing that it will come with the top of the line specifications featuring Snapdragon 800 and a better resolution display.

The images don’t give us any details about the availability of the tablet. While this rumor could be true, a grain of salt is recommended. Google is expected to schedule an event on October 14th for the launch of the highly anticipated Google Nexus 5 alongside Android 4.4 KitKat. So, there’s a possibility that it is announced at the same event in October

Who do you think will manufacture the upcoming Nexus 10, Samsung or ASUS?