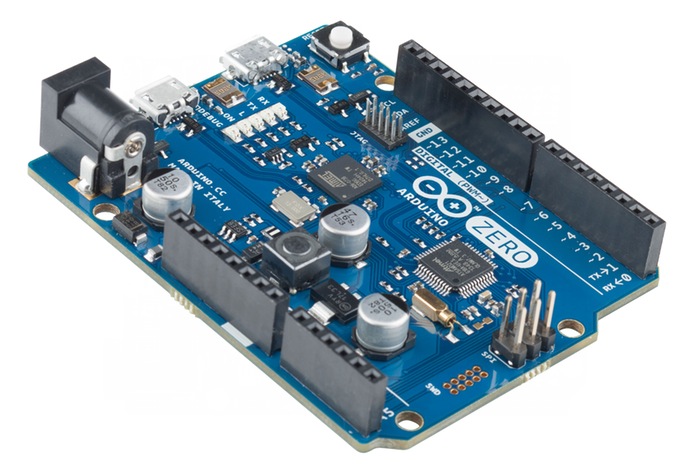 During this years Maker Faire, the Hack-a-Day website were able to get an interview with Bob from Atmel for the lowdown on the recently announced Arduino Zero development board.

The Arduino Zero has been designed for developers and hobbyists to use for smart IoT devices, and projects such as robotics, wearable technology, and automation to give you a few examples and offers OpenOCD support and GDB support. Watch the video after the jump to learn more.

Arduino has equipped their new Arduino Zero board with an Atmel’s SAMD21 MCU, featuring a 32-bit ARM Cortex M0+ core, with 256kb of flash and 32kb SRAM in a TQFP package making it compatible with 3.3V Shields that conform to the Arduino R3 Layout. Hack-a-Day explains :

“They did have board in hand which were so newly minted he had only received it 48 hours before our interview. The hardware looks wonderful, but there are two signals that were swapped meaning at least one more board spin before the hardware goes into production.”

“The Zero board expands the Arduino family by providing increased performance to fuel the creativity of the maker community. The flexible feature set enables endless project opportunities for devices and acts as a great educational tool for learning about 32-bit application development.

One of its most important feature is Atmel’s Embedded Debugger (EDBG), which provides a full debug interface without the need for additional hardware, significantly increasing the ease-of-use for software debugging. EDBG also supports a virtual COM port that can be used for device programming and traditional Arduino boot loader functionality.”

For more information on the new Arduino Zero jump over to the Arduino website for details.