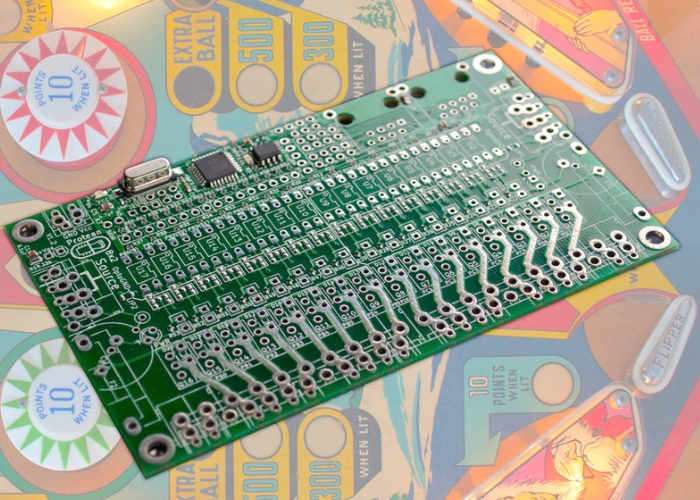 Adam Humphreys has created a new affordable Arduino programmable power controller in the form of the Protean 8×2 which offers a 16-Ch N/P FET power node/controller, wired, interfaced, programmed and can be addressed in a variety of different ways to suit your individual projects.

Watch the video below to learn more about the Arduino programmable power controller which allows you to bridge the gap between micro-controllers and power sources. 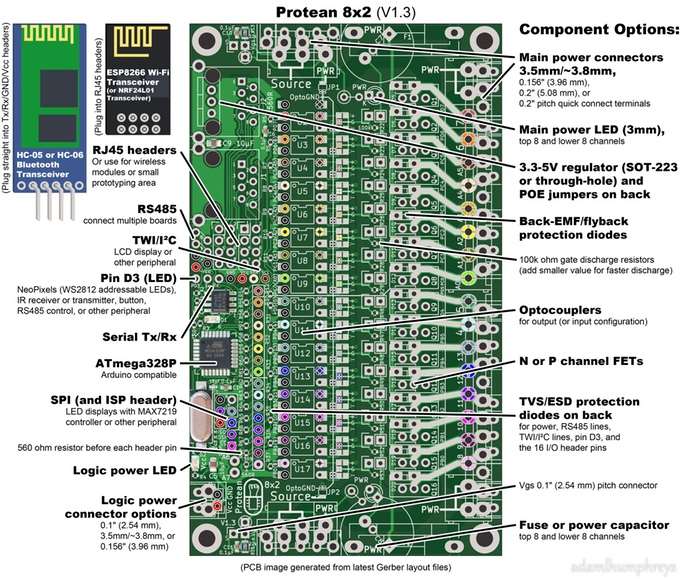 Specifications for the Arduino power controller include :

Technical:
• Controlled by the ATmega328P, the classic Arduino chip (which includes TWI/I²C and SPI interfaces)
• RS485 interface chip (data direction controlled by pin D2; tested up to 2M baud)
• Recommended logic supply: 3.3V to 5V
• Output/High voltage side designed to work up to 100 volts, (and has been tested with ~120V pulsed DC)
• 16 optically isolated channels (main I/Os).
• Up to 3.67 amps on a single channel with bare PCB trace
• Up to 7 amps on FET source common with bare PCB trace
• Power traces bare, allowing for added solder to increase current handling.
• LED indicator for logic power
• LED on port D3, (or digital pin 3).

Component Footprints Ready: A place for…
• TO-220 case FETs
• 4-pin DIP or gull wing SMT optocouplers
• LED (3mm) and resistor for main power indicator, (both upper 8 and lower 8 channels)
• 5mm x 20mm fuse holder or capacitor, (both upper 8 and lower 8 channels)
• Vgs, or gate-to-source voltage select resistors, surface-mount or through-hole, (both upper 8 and lower 8 channels)
• Back-EMF/flyback protection diodes, (surface-mount on top or through-hole on bottom)
• Optional lower value gate discharge resistors, surface-mount or through-hole, (100k already included)
• An LD1117S regulator in an SOT-223 package for POE on spares configuration, (on bottom of board)
• TVS diodes in an SOT-23 package for ESD protection on power, RS485 lines, TWI/I²C lines, port D3, and the 16 I/O header pins, (all on bottom of board)

For more information on the new Arduino programmable power controller jump over to the Kickstarter website for details by following the link below.