This week the architect firm responsible for the construction and design of the new Apple Apple’s ‘Spaceship’ Campus, Foster + Partners and the firm’s founder, Norman Foster have revealed a few more details about the design of the new iconic Apple headquarters.

Explaining that there will be plenty of space for plants and trees, thanks to the tight design of the building that is far more economical on space usage than the previous building that was on the land before Apple started development, as well as providing jogging and bicycle trails. 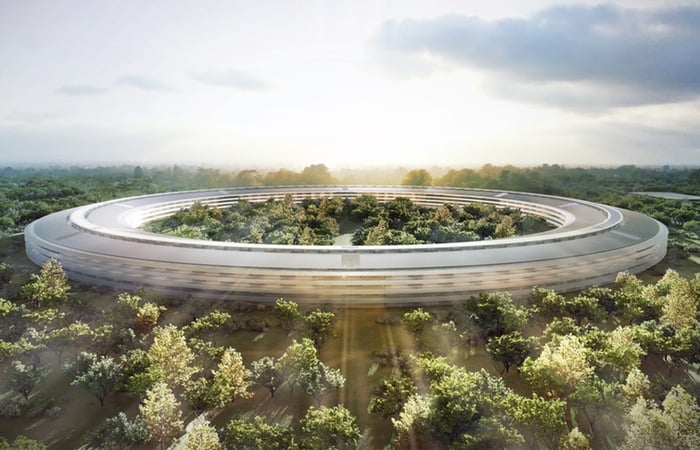 With 80 percent of the landscape making room for the 7,000 trees, even with 12,000 Apple employees working on the site. The current Apple headquarters offers space for around 2,800 Apple employees and Foster explains that the ‘spaceship’ name for the site was first referenced by Steve Jobs himself, who said that it’ll look “a bit like a spaceship landed.”

Foster also explained that his firm has carried out a number of planning studies for creating the iconic Apple circular building which is meant to emulate a town square with buildings encircling a park, saying:

“These studies finally morphed into a circular building that would enclose the private space in the middle — essentially a park that would replicate the original California landscape, and parts of it would also recapture the orchards of the past,” he said. “The car would visually be banished, and tarmac would be replaced by greenery, and car parks by jogging and bicycle trails.”

Construction of the new Apple headquarters is expected to be completed by 2016 and will incorporate an underground car park for employees to park their vehicles out of sight allowing more trees and plants to be viewed from the building’s windows, rather than rows of parked cars.