According to a recent report by research firm Garnter, Apple is now in the top five  PC makers in Europe, sitting at number five, and making up 6.6 percent of all PC sales in western Europe in quarter one of 2011.

According to the report, Apple sold 966,000 units for the quarter, and increase of 10 percent over the past year, whilst the other PC manufacturers in the top 5 lost up to 29 percent on their sales on the previous year. 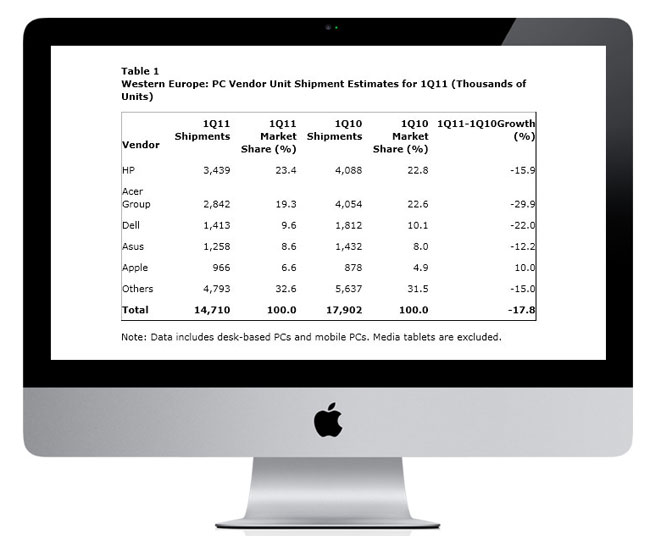 “The PC market in Western Europe had not exhibited a decline since the second quarter of 2009,” said Meike Escherich, principal analyst at Gartner. “This quarter’s poor performance was due to excess inventory accumulated at the end of the fourth quarter of 2010 in many countries in Western Europe. The excess inventory was reduced only slightly, as demand came to a standstill. The seasonal growth was also weaker than expected, indicating that the downward trend seen at the end of 2010 continued into the first quarter of 2011.”

Apple’s computers are becoming increasingly more popular here in the UK, with sales up 15 percent on the same period last year, you can find out more details over at Gartner.