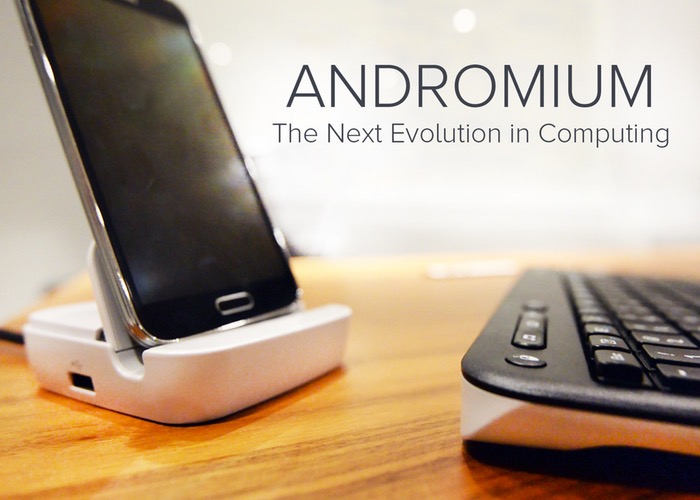 Android smartphone owners that would like to transform their smartphone into a desktop computer might be worth giving the new Andromium Computing Platform a little more investigation.

The Andromium Computing Platform has been crated to “democratize desktop computing – unleashing the full potential of your android smartphone” say its inventors. Watch the video after the jump to learn more about the Andromium project and see it in action.

The Andromium Computing Platform project is currently over on the Kickstarter crowd funding website looking to raise $100,000 in pledges and seamlessly integrate with your smartphone.

“The Snapdragon CPU inside many of your devices is faster than the number one supercomputer in the word in 1996! And it could be just sitting idly in your pocket right now, as you browse Kickstarter on a clunky desktop computer.

The Andromium dock embodies sleek, clean design. It’s a combination of the best aesthetics: beautiful, ergonomic, and pleasing to use. We built the Andromium dock with you in mind. We included three full-sized USB ports for all the accessories you would need on a desktop computer, including gaming devices. We’ve also integrated a port for a power cord, so your phone is always charged.

We specifically designed the dock with portability in mind. We’ve given it a light, durable, travel friendly design with a flip cover to protect it during transport. On top of this, the dock has been designed so to fit your device without having to remove its slim, protective case.”

So if you think Andromium is something your Android smartphone could benefit from, visit the Kickstarter website now to make a pledge and help Andromium Computing Platform become a reality.