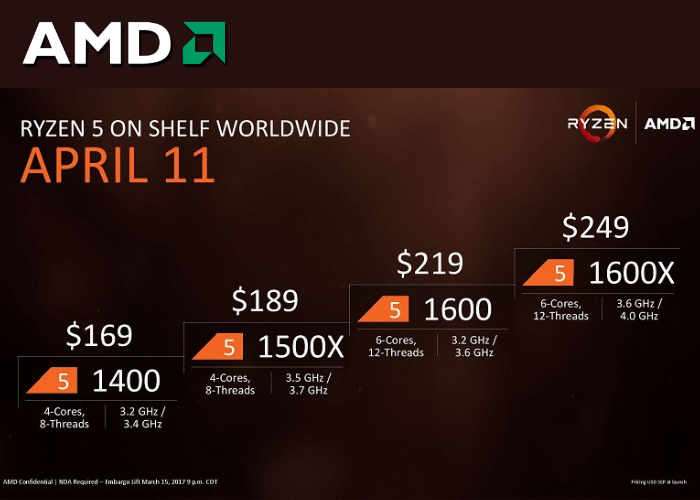 If you are interested in learning more about the gaming performance of the new AMD Ryzen 5 1400 processor which will be available little later this month.

A video has been published by an early adopter was already received the new hardware and been able to put it through its paces while overclocked to 3.8 GHz.

When overclocked to 3.8 GHz the new AMD processor is on the same playing field as the Intel’s i5 7400 poor comparison and a Kingston HyperX Fury 2133@2666 MHz kit was used for both systems.  Gaming performance for each game at specific times :

Even though the NDA still isn’t up on AMD’s second volley of Ryzen-based CPUs, some lucky buyers are already running some of the upcoming Ryzen 5 processors after some sellers jumped the gun. Now, a YouTube video by user “Santiago Santiago.” is making the rounds in which he compares gaming performance between the Ryzen 5 1400 (4-core, 8-thread part @ 3.2 GHz base, 3.4 GHz boost), Intel’s i5 7400 (4-cores @ 3.0 GHz base, 3.5 GHz boost), and the Pentium G4560, a Kaby Lake dual-core CPU with Hyper Threading @ 3.5 GHz base clocks. The user even snapped a picture proving he has his hands on this chip.

Keep in mind that AMD’s Ryzen gaming performance has seen multiple improvements as of late, though these improvements have been more dependent on game developers than on AMD itself. However, the company is looking towards BIOS updates that should improve Ryzen’s support and handling of high-speed DDR4 memory (with some latency improvements to boot), which should also provide some measure of a performance improvement.