Its a well known practice for a hardware manufacture to include free games with high end graphics cards and the like, but AMD has accidentally leaked 1.7 million DiRT 3 game activation keys in a recent security blunder.

Codemasters and AMD had joined forces to run a DiRT 3 promotion but unfortunately AMD left the codes in nearly plain site in one of its website folders. The folder in question had no .htaccess protection and contained files listing the activation codes, that could be easily seen it the folder was accessed via a web browser. 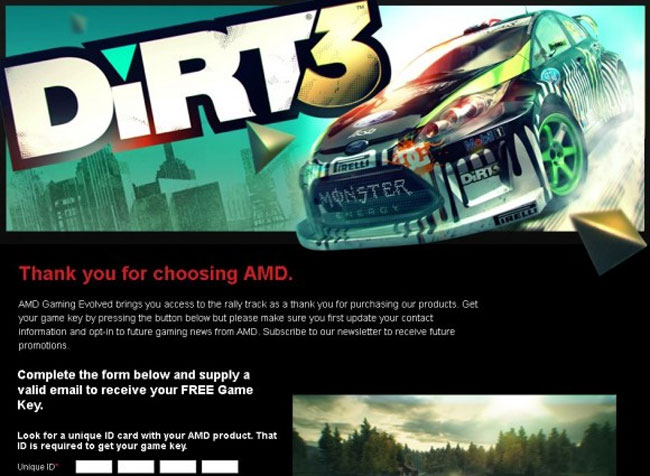 Even though the keys have been leaked into the wild, it should be pretty easy for AMD to get them blocked by Valve through their Steam service, and Valve may decide to ban any account that has used such a key.

Lessons have been learned by AMD, and it goes to show that even the largest company can make simple security mistakes with their websites.

Update: Spokesman for AMD Matt Kanas here from Edelman PR has contacted us to shed a little more light on what happen with the codes.

“This past weekend, activation keys associated with free Dirt 3 game vouchers shipping with select AMD products were compromised.  These activation keys were hosted on a third-party fulfillment agency website, www.AMD4u.com, and did not reside on AMD’s website.  Neither the AMD nor Codemasters servers were involved.

We are working closely with Steam, Codemasters, and our fulfillment agency, to address the situation. AMD will continue to honor all valid game vouchers, however the current situation may result in a short delay before the vouchers can be redeemed.”

AMD is pleased to announce that, having worked closely with Steam, Codemasters, and their fulfillment agency, AMD has now addressed the situation with Dirt3 game vouchers and the Dirt3 redemption page is now fully operational. Consumers are now able to input their existing codes for redemption of all valid vouchers. AMD appreciates your support during this time and would also ask you to provide us with any feedback you receive, either through your own interactions with the site or via consumer feedback, so that we can continue to hone the process.