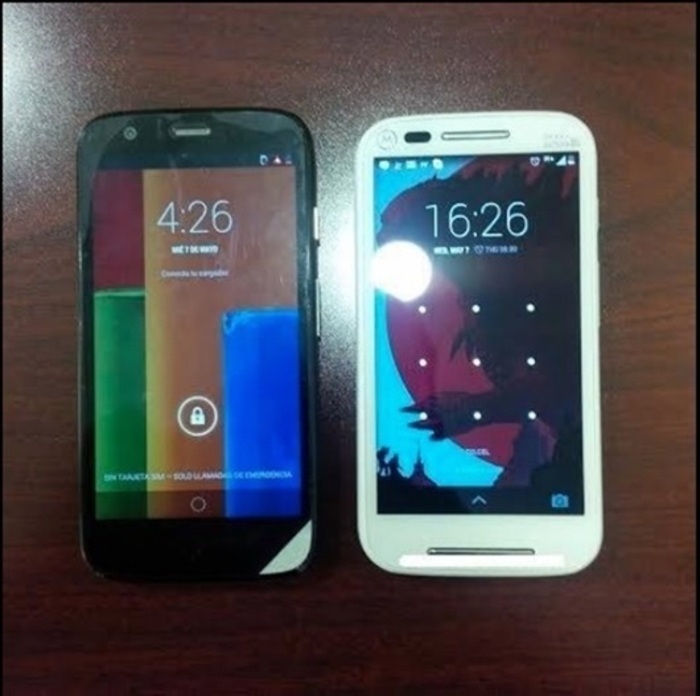 Earlier today, we saw some leaked press renders of the alleged Moto E, along with the possible specifications, thanks to a listing on a Brazilian retailer’s website, confirming the rumor that we might see the handset very soon.

Now, the purported Moto E has posed for the camera alongside the Moto G, which shows that the device is a tad smaller in size as compared to the Moto G, and should feature a similar user interface.

The image of the purported device was posted by a user on Facebook, who took the image alongside the Moto G. If you haven’t noticed, it seems the design of the device is a little different when compared to the Moto G.

As per rumors, the handset should come with 4.3-inch display sporting a resolution of 1280 x 720 pixels, and will be powered by a dual-core Snapdragon processor with 1GB of RAM.

On the storage side, it’s expected to come with 4GB of ROM with a microSD card slot for expandable storage, The expandable storage was missing from the Moto G, and it seems Motorola heard the woes, and decided to introduce it in the upcoming smartphone.

Other features include 5MP camera for photos and videos, a 1,980 mAh battery, WiFi Bluetooth and should come with Android 4.4 KitKat as its operating system.

Motorola is expected to take the wraps off the device on May 13th at the company’s press event. We’ll update you as soon as it’s officially announced.