One such new application has been designed by Koushik Dutta called AirCast which was first unveiled back at the beginning of August and allows you to stream media from your Android phone or tablet directly to Google’s Chromecast. 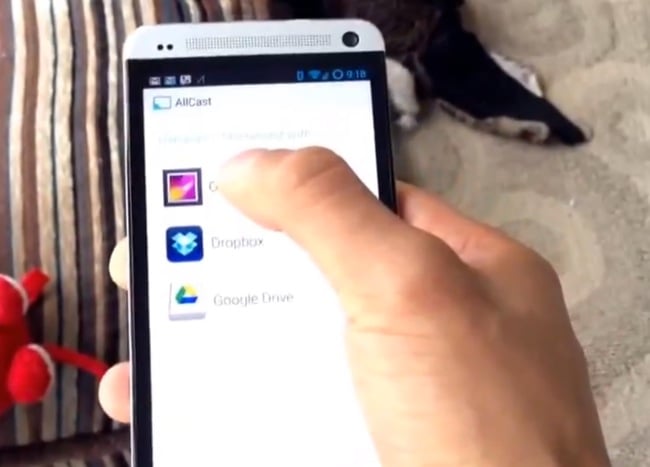 Now a test beta version has of the new application called AirCast has been released by Dutta enabling you to enjoying streaming content from your Android smartphone, Android gallery, Google Drive or Dropbox directly to your Google Chromecast device, which is plugged into your big screen HDTV via a spare HDMI port.

Google has designed their Chromecast to stream content from a handful of Android apps including YouTube, Netflix, and Google Play Movies to your HDTV but now developers are pushing the boundaries of the service and enabling other methods off strewing content. The difference being that when you tap the Chromecast button on your devices, you’re actually sending a command to Chromecast to start streaming that video directly from the internet, not from your Android smartphone or tablet.

The new AirCast Android application allows you to do more that this and send video directly from your smartphone to the Chromecast, whiteout the need for the media to be published to the Internet. Watch the video below to see the new AirCast Chromecast app in action to see how it works in reality.

“I spent a couple hours yesterday reverse engineering the Chromecast protocols. Great success! I am now able to get around all the developer whitelist restrictions. I’m actually not using the Chromecast or MediaRouter SDKs at all anymore.

AirCast is an Android app that lets you share videos from your Gallery, Dropbox, or Drive, straight to your Chromecast enabled TV. It’s straightforward to use, share, play, and control the stream via the remote in the app (or notification area).”

For more information on the new Aircast Android app jump over to the Koushik Dutta’s post on Google+ website for details.