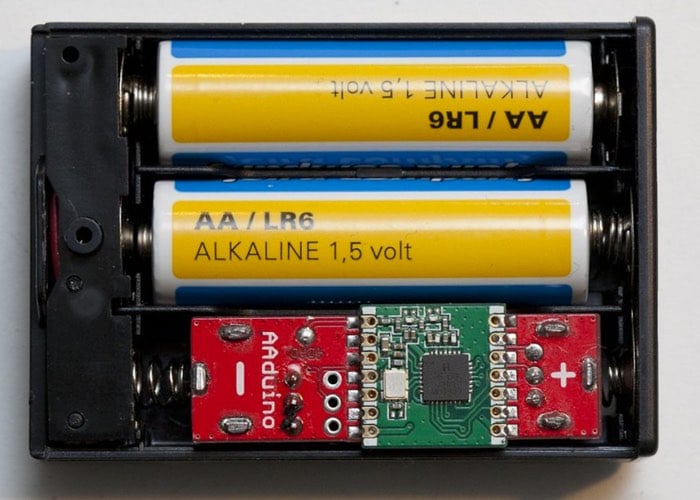 Arduino enthusiasts looking for a super small Arduino-based development board may be interested in the AAduino, which takes the form of an Arduino clone that is the same size as a AA battery.

The AAduino board measures just 44.9 x 13.8 mm and is equipped with a Atmel ATmega328P micro-controller with 32KB of flash memory together with 1024B of EEPROM, and 2KB SRAM.

Its creator Johan Kanflo has down clocked the processor from 20 MHz to 8 MHz to save on voltage and added a unique way to add power to the tiny Arduino development board by including the connections directly onto the board allowing you to insert it into a AA battery holder with ease. 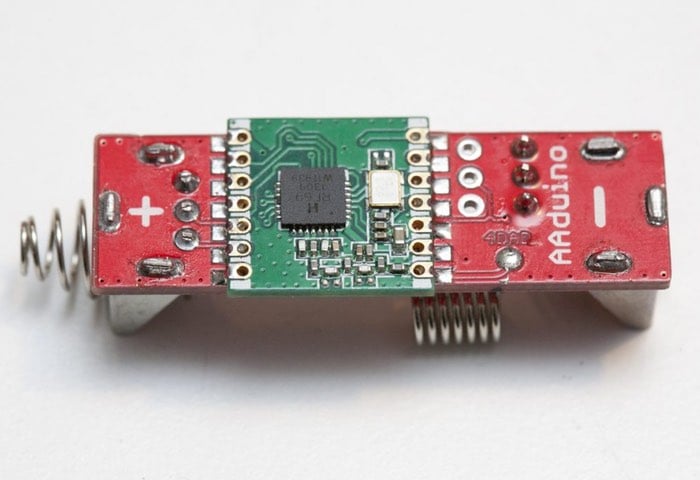 Kanflo explains more about the inspiration behind the tiny Arduino development board and more about its features and functionality.

I have been using Nathan Chantrell’s Tiny328 for quite some time as my swiss army knife ISM radio node. Now I wanted a more slim ISM node as my setup with a Tiny328 on a breadboard is not very “deployable”.

The AAduino is an wireless Arduino clone the size of an AA battery with Keystone battery terminals rotated 180° to act as positive and negative terminals. It is powered by an ATMega328p and is fitted with an RFM69C companion. There is room for two DS18B20 temperature sensors and an indicator LED.

It runs at 8Mhz to allow for greater life span since the CPU can run at a lower voltage. I have fused the 328 to brown out at 1.7V which is a bit out of spec at 8Mhz and slightly below what the RFM69C needs. Running at 4Mhz would be more suitable but I will see how well the node performs when the batteries are draining out.

For more information on the new AAduino Arduino based board jump over to the Johan Kanflo website for details following the link below.