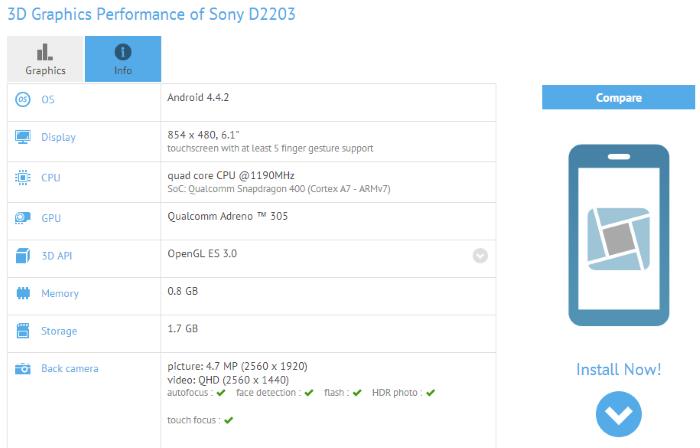 Sony is rumored to be working on a number of handsets, including the high-end Xperia Z3, as well as a compact version of it which will offer a similar set of specifications with a smaller form factor.

It seems Sony has more devices in the pipeline, including an entry-level phablet carrying a screen size of 6.1-inch, expected to launch in the coming months.

Recently, a device with a D2203 model number was spotted on GFXBench website, revealing what the phablet will offer. We don’t know about the moniker it will go on sale with, but one thing is for sure: it will feature low-end specifications, but with a phablet sized form factor.

As per the listing, the device in question rocks a 6.1-inch display sporting a resolution of 854 x 480 pixels, with a quad-core Snapdragon 400 SoC and Adreno 305 GPU. There’s 1GB of RAM and 4GB of internal storage, possibly with a microSD card slot, a 5MP rear camera for photos and videos, and a 0.3MP front-facing camera. On the software side, it runs Android 4.4.2 KitKat as its operating system.

It seems the Japanese OEM may launch a budget phablet, possibly in selected Asian markets where entry-level handsets with big screens are becoming popular. We’ll update you as soon as we get any other information about the alleged device.