The guys over at the iPhone Dev Team have finally managed to unlock the 3G iPhone. 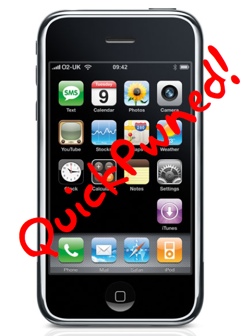 They will be releasing a new version of the iPhone Pwnage Tool and Quickpwn which will allow for an unlock of the 3G iPhone.

The new versions of the iPhone unlock tools will be released around the 31st of December and will allow you to use the 3G iPhone on any mobile phone network.

Head on over to the iPhone Dev Team for more details.

There is now a new version of QuickPwn available, QuickPwn 3.0 which lets you Jailbreak the iPhone 3.0 Beta 2 OS.