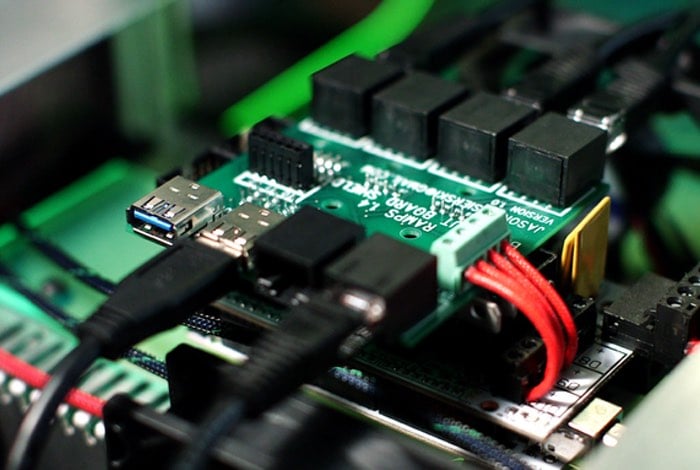 Jason Pasierski has created a new 3D printer Breakout Shield for RAMPS that has been designed to provide a drop-in upgrade for 3D Printers who utilise a RAMPS 1.4 controller board.

To re-cap the Ramps 1.4 is a hardware device that has been created to control all the components of a 3D Printer. The Breakout Shield for RAMPS 1.4 has been designed to improve this and combines multiple inputs/outputs into fewer connections.

Watch the video below to learn more about the new Breakout Shield for RAMPS 1.4 from its creator who explains :

Our Shield interfaces with Ramps 1.4 and consolidates multiple inputs/outputs into fewer, simpler and more efficient wire management. When we first started designing a 3D Printer, we incorporated a viable electronics hardware package (Ramps 1.4) that was already a staple in the 3D Printing community.

The main focus was about creating a better 3D Printer than what was available. The electronics were initially overlooked in how they would merge with our initial prototypes simply because the mechanics were our main focus. Heck, we were just excited about 3D printing and not concerned about all the nuances.

As designs evolved with Printing and wanting to create better hardware, we faced obstacles with the common 3D Printing hardware. We would be forced to choose other similar electrical packages or enhance what we had. The challenge with creating this additional  Breakout Shield for the Ramps 1.4 eventually enabled us to close the design process for our 3D Printer and hopefully you’ll see what it can do for you!

More details on the 3D printer Breakout Shield for RAMPS 1.4 jump over to the Kickstarter crowdfunding website where the basic package is available to pledge for priced at just $60 with shipping expected to start later this year during December 2015.