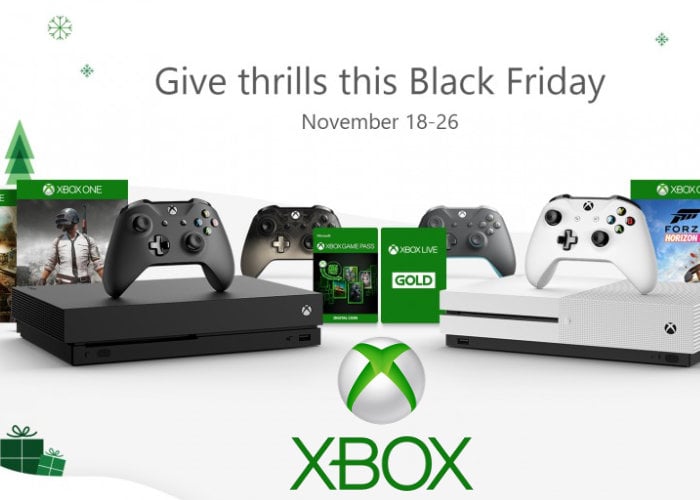 During X018 over the weekend Microsoft has revealed the 2018 Xbox Black Friday Deals that will be available from Microsoft that will include the lowest price yet for the new 4K Xbox One X, Xbox Game Pass and more. Microsoft will be offering a $100 discount on select Xbox One devices and Xbox One S consoles. Black Friday special offers will be available even earlier for Gold members, with great deals on Xbox digital games, with Early Access beginning on November 15th, 2018.

“Games play best on Xbox, so we’ll be offering a $100 discount on select Xbox One consoles from 11/18 through 11/26. Get the Xbox One X, the world’s most powerful console, at its lowest price ever, or the Xbox One S, the best value in games and entertainment.

Can’t decide what gift to get the gamer in your life this holiday? With Xbox Game Pass, you can now give the ultimate gift of over 100 great games, including new Xbox Exclusives the same day they launch. This holiday season, you can join Xbox Game Pass for just $1”.

From 11/22 through 11/30 Microsoft is also making available a number of Xbox games at limited time prices :

For more details on all the 2018 Xbox Black Friday Deals but will be available at the end of this month jump over to the official Xbox news website by following the link below.