If you remember the good old ZX Spectrum created by Sinclair and released in the UK in 1982 you probably enjoyed playing the games included in the ZX Spectrum Elite Collection for iPhone or iPod.

If you dont remember or are too young the app gives you a chance to see what gaming was like back in the 80’s when everything was just 8-bit and rubber keys. Watch the video after the break for an demo. 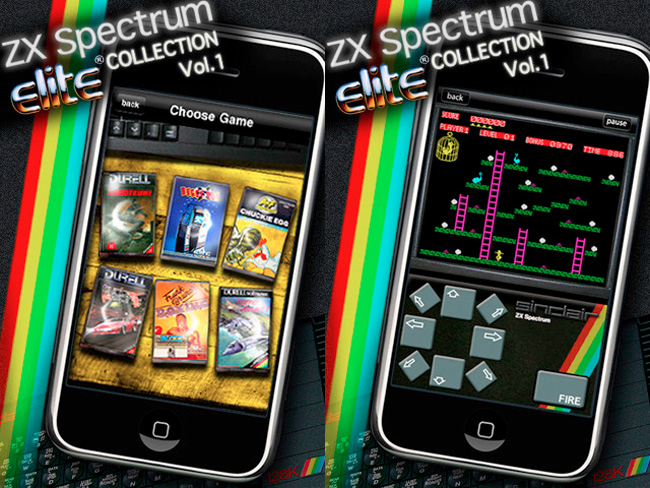 The App is an iPhone ZX Spectrum emulator that comes with a number of games included that make up Volume 1.Elite Systems plans to release at least another two volumes via free app updates. Volume two will consist of six additional titles and is hoped to be released within the next month.

Unfortunately theres no Jetpack or ManicMiner in this volume but it does include:

• Turbo Esprit – Fight against drug crime as a special agent searching for big-time heroine dealers. Making your way around different cities, you use your Lotus Esprit to locate and take out the criminals vehicles before they can deliver the goods.Turbo Esprit was claimed to have some of the most details, and be one of the first free-roaming driving titles of the era.

• Saboteur – Enter the role of a ninja, whose objective is to obtain a floppy disk with the names of rebel leaders. The disk is located in a warehouse, where you must climb ladders, travel through tunnels, and otherwise find your way to locating the disk and escaping the complex without dieing.

• Chuckie Egg – Hen-House Harry needs to collect all of the eggs to complete his mission. If he touches a hen or falls down a hole, he loses a life. Collect seeds to temporarily pause the game timer. Chuckie Egg is a platformer with the same general gameplay as some other classic titles like Lode Runner.

• Harrier Attack – Presumably based from the Falklands War, and the Harrier Jump Jet importance, Harrier Attack is a side-scrolling air-fighter game where you’ll bomb targets and attack enemy aircraft before returning to your base or aircraft carrier.

• Frank Bruno’s Boxing – The game is a trimmed down and slightly modified version, developed and published by Elite Systems for the Commodore 64, the ZX Spectrum, and the Amstrad CPC, of the earlier Super Punch-Out boxing title by Nintendo.

• Buggy Boy – An original arcade style traditional racer where you will pit yourself against other dune buggies to complete courses in the shortest time possible. The cockpit view was said to be one of the most impressive of its time.

ZX Spectrum: Elite Collection runs on  iOS 3.1.3 or later, and is available from the app store for $.99.