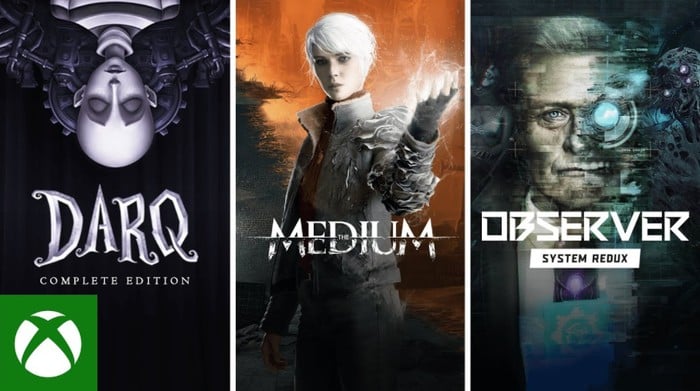 Xbox gamers searching for a fright might be interested in the new Ultimate Horror Bundle now available to purchase from the Xbox store offering a chance to own The Medium, Observer: System Redux and the DARQ: Complete Edition for the Xbox One And Xbox Series X|S games consoles. “Use your psychic abilities to uncover the disturbing secrets of The Medium, become a neural police detective in the dark cyberpunk world of Observer: System Redux, and bend gravity inside the lucid nightmares of DARQ: Complete Edition.”

“The Ultimate Horror Bundle brings you three award-winning horror experiences from Bloober Team & Feardemic, bundled together at a reduced price and optimized for Xbox Series X|S. Use your psychic abilities to uncover the disturbing secrets of The Medium, become a neural police detective in the dark cyberpunk world of Observer: System Redux, and bend gravity inside the lucid nightmares of DARQ: Complete Edition.”

The Medium
Discover a dark mystery only a medium can solve. Travel to an abandoned communist resort and use your unique psychic abilities to uncover its deeply disturbing secrets, solve dual-reality puzzles, survive encounters with sinister spirits, and explore two realities at the same time. The Medium is a third-person psychological horror game that features patented dual-reality gameplay and an original soundtrack co-composed by Arkadiusz Reikowski and Akira Yamaoka.

Observer: System Redux
The year is 2084. In a dark cyberpunk world shattered by plagues and wars, become a neural police detective and hack into the jagged minds of others. Make use of anything they felt, thought, or remembered to solve the case and catch the elusive killer. Observer: System Redux is the definitive vision of the award-winning cyberpunk thriller, rebuilt and augmented for the next generation.

DARQ: Complete Edition
DARQ tells the story of Lloyd, a boy who becomes aware of the fact that he is dreaming. To Lloyd’s misfortune, the dream quickly turns into a nightmare and all attempts to wake up end in failure. While exploring the darkest corners of his subconscious, Lloyd learns how to survive the nightmare by bending the laws of physics and manipulating the fluid fabric of the dream world. DARQ: Complete Edition is the complete edition of the acclaimed gravity-bending horror-puzzler experience, including the base game DARQ plus DLCs The Tower and The Crypt.