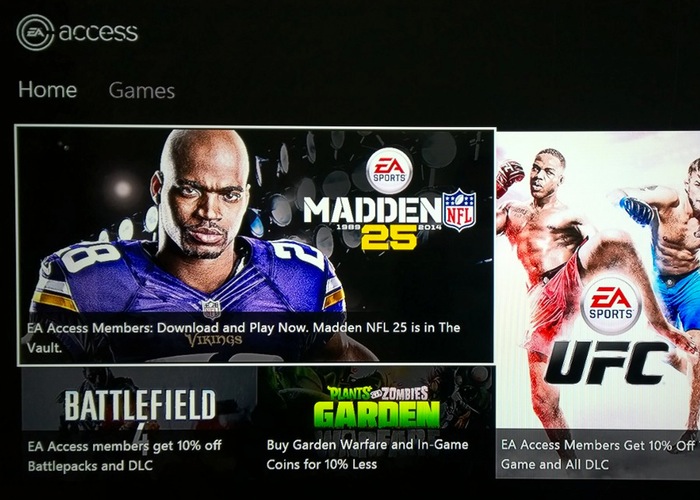 Last month EA unveiled their plans to launch the subscription service for $4.99 a month or $29.99 annually, allowing gamers to have the ability to download and play a variety of Xbox games from EA in The Vault.

The subscription service launched by EA provides access to Xbox One games such as Battlefield 4, FIFA 14, Madden NFL 25 and Dragon Age to name few. EA explains a little more:

“As a member, you’ll also have the opportunity to try new EA games five days before the release date. Get ready to jump into Madden NFL 15, FIFA 15, NHL 15 and Dragon Age: Inquisition by downloading the game before the release date and playing for a limited time. And if you want to keep playing? Your progress in the trial will be saved so you can pick up right where you left off if you decide to purchase the game.

Digital purchases of EA games for Xbox One, downloadable content and virtual currency made available on Xbox Live will be 10% off for EA Access members. So if you liked what you played during your early trial, you can purchase the game for your collection at a 10% discount as soon as it’s released. It also means purchases of Digital Expansion Packs and Battlepacks in Battlefield or new packs in FIFA Ultimate Team are all 10% off.”

To join up for membership to the new EA Access Xbox One games subscription service jump over to the EA website for more details.