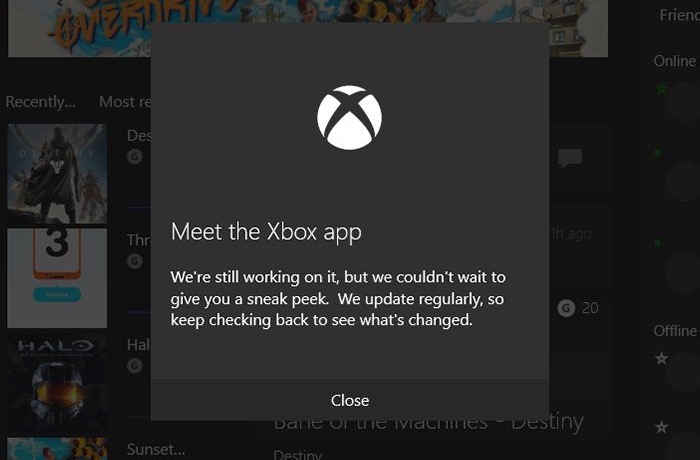 Xbox owners that are interested in the new Xbox App on Windows 10 might be interested to know that the application will be available in the January Windows 10 Technical Preview.

In the video below the Xbox App on Windows 10 has been demonstrated by Richard Irving from the Xbox engineering team, during an interview with Larry Hryb, Xbox Live’s Major Nelson.

During the video you can see what you can expect from the first technical preview of the Xbox app with Microsoft’s latest Windows 10 operating system. However the Xbox App is still currently under development and has some way to go before it will be launched as a final release.

– Your Profile – provides you quick access to your Xbox profile and recent activity and achievements. With the initial preview build, you can see your Gamerscore, recent Activity, Achievements, Following lists and Game Clips.

– Home – the Xbox app home page will provide you quick access to your Recently Played games, your friends and their online status and an Activity Feed of recent events, game clips, etc.

– Friends – you can see your friends across devices and search and find new friends. Additionally, you can go the profile page for your friends and followers and view their recent activity, achievements, friends, games they follow and game clips.

– Activity Feed – you can view your activity feed and post text, like and comment on your friends’ recent achievements and Game clips. In this version of preview build, the sharing functionality is not yet enabled.

– Settings – Within settings, you can see the current Version number of the Xbox on Windows app, and choose to Sign out from the app. Additionally, you can turn on/off the following item Messages – Users can view messages from other users and system messages / notifications.

For more information on the new Xbox App on Windows 10 jump over to the Major Nelson website for details via the link below.

You can check out with the initial preview release in the January build of the Windows 10 Technical Preview over on the Xbox Live website.