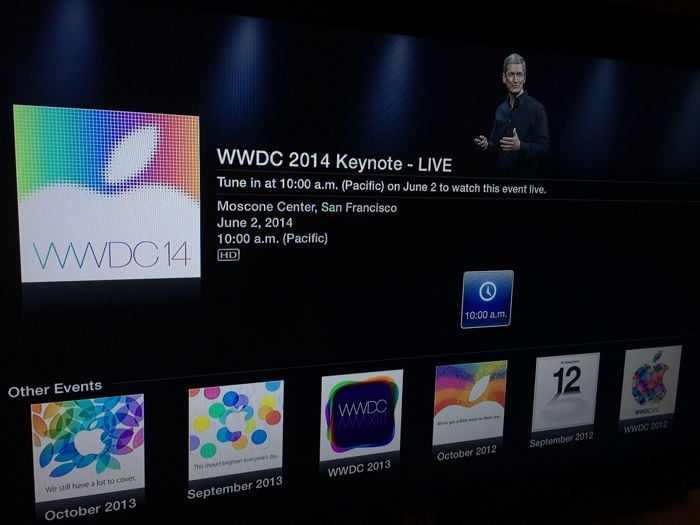 Apple announced last week that its 2014 Worldwide Developer Conference would be available on iOS devices, its website and the Apple TV, and now Apple has added a WWDC 2014 live stream channel to the Apple TV.

Apple’s WWDC 2014 launches today with the company’s Keynote speech which will be headed by Apple CEO TIM Cook, the event is being held in the Moscone Center in San Francisco.

We are expecting to heard about a number of things at WWDC 2014, which will include the latest version of Apple’s mobile OS, Apple iOS 8.

We are also expecting to heard more details about the next major release of Apple’s desktop software, OS X 10.10, and also about Apple’s plans for home automation and a number of other things.

It is not clear as yet on whether we will see any new hardware at this years worldwide developers conference, we could possibly see a new Apple TV and maybe some new Macs.

We are not expecting to see the iPhone 6 or the Apple iWatch until September, Apple are rumored to launch a 4.7 inch iPhone 6 in September and a 5.5 inch version of the device in October or November.

Apple will also launch iOS 8 in September, although we are expecting them to launch a developer preview of iOS 8 after it is announced at WWDC 2014 later today.