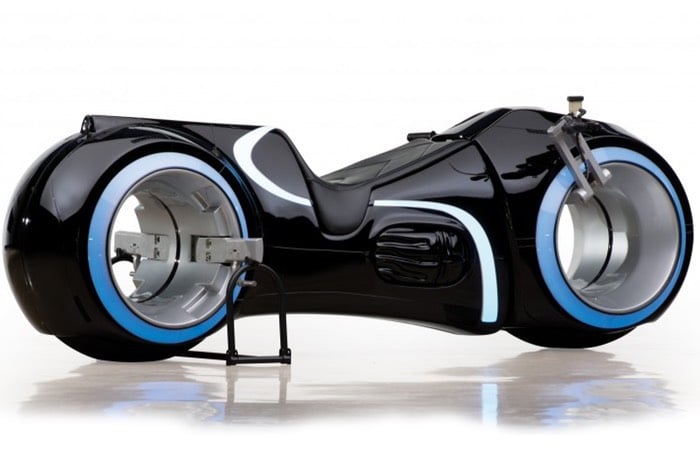 Yesterday during an auction that was part of the RM Sotheby’s Andrews Collection, that included lots from model car engines to customised classic cars and of course the awesome fully functional Tron Light Cycle pictured above and featured before here on Geeky Gadgets.

The working Tron Light Cycle replica is powered by a 96 volt electric motor and was purchased during the auction for $77,000 and is equipped with a computer-controlled throttle.

• A recreation of the Tron: Legacy motorcycle
• Functional electric motorcycle
• The ultimate homage for any fan

This custom electric vehicle was built especially for the Andrews Collection to recreate the unique motorcycles seen in the 2010 movie Tron: Legacy. It is a highly compelling work of mobile art that has an enduring connection to pop culture.

The bike was partially built by an outside firm and then sent to the Andrews’s own shop for completion. It is a fully functioning motorcycle that can be ridden, as it is powered by a direct-drive electric motor that has lithium batteries, which is mated to a computer-controlled digital electronic transmission. This custom Tron tribute boasts a very low seat height of 28.5 inches, making it easy to ride even at low speeds. The motorcycle is finished in black with a white stripe and boasts an imposing stance to match its performance.

After its completion by the Andrews’ in 2012, the bike has only been ridden around their facilities to ensure that it remains in functioning condition. As such, it is in as-new condition and would be an ideal piece for any collection of movie memorabilia. It is unlikely that a similar motorcycle will ever be produced or made available for purchase, making this a truly unique opportunity.”