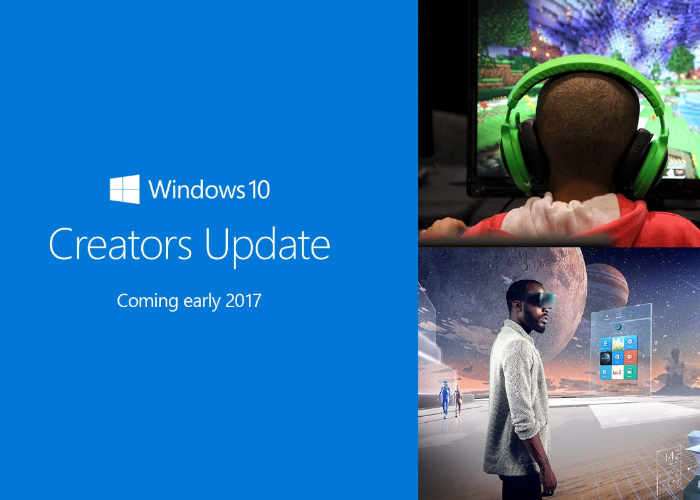 This week Head of Platform Engineering for Xbox, Mike Ybarra has revealed more details about the next update for both Xbox One and Microsoft’s latest Windows 10 operating system which will bring with it a wealth of new features and functionality as well as increased performance.

The new updates that will be rolling out during 2017 will provide options to instantly stream to Beam on Windows 10 and Xbox One, as well as providing enhancements to improve gaming performance with the aim of making Windows 10 the best ever Windows operating system for gaming, says Microsoft.

2017 is going to be a monumental year for gaming at Microsoft. Whether you play on Xbox One, a Windows 10 PC, your mobile phone, or anywhere you sign-in with Xbox Live, we’re going to make your gaming experiences easier, more social, and better with innovative hardware and software features throughout the year.

We’re focused on feedback from our fans and innovative, new ideas from our engineering teams that will enhance gaming on the Xbox One and will make Windows 10 the best operating system for PC gaming. In October, as a part of the Creators Update, we announced that Beam, gamer-created tournaments, and other fan requested features would be coming. We’re kicking off 2017 by introducing some of these features next week, with more updates to share in the coming months.
These updates are about four key themes: Streaming, Performance, People, and Competition. We’ll make it easier to stream than ever before, by making Beam a feature on Xbox One and Windows 10. We’ll improve the performance of your PC games through the all new Windows Game Mode. And we’ll release Arena on Xbox Live, where you can play in organized tournaments or create your own, making eSports available for everyone.

Instantly stream to Beam on Windows 10 and Xbox One – We’re building Beam as a feature of Xbox One and Windows 10, making Beam one of the easiest and quickest ways to stream your gameplay.

Beam will connect to your Xbox Live account, making it easy to stream your favorite games to Beam and your Xbox Live community. No extra software is needed and viewers anywhere will be able to watch your streams and interact with your broadcast. On a Windows 10 PC, press Windows + G to pull up the Game bar and click the broadcast button to start streaming. On Xbox One, you can start streaming with one button press from inside the Guide.
Increased performance in gaming

Our goal is to make Windows 10 the best Windows ever for gaming. With the Creators Update, we’re introducing a new feature called Game Mode. Windows Insiders will start seeing some of the visual elements for Game Mode this week, with the feature being fully operational in builds shortly thereafter. Our vision is for Game Mode to optimize your Windows 10 PC for increased performance in gaming. This is a big update for Windows; we’re looking forward to Insiders getting their hands on this new feature for further testing, and we’ll have much more to share on what it is and how it works soon, so stayed tuned.

In addition, every Xbox One will see an update coming to the Guide that will make it faster to complete common tasks. Through one press of the Xbox button on your controller, you’ll be able to pull up the newly enhanced Guide as an overlay on the left side of your screen no matter what you’re doing. In addition, we’re rebuilding the most popular multitasking experiences for speed and ease of access. For example, you’ll be able to start recording your GameDVR clips, adjust your recording length, and access your captures directly in the Guide. We’ll also add a new Achievement tracking overlay, Gamerscore Leaderboard, a new Cortana design, and controls for background music, making these features easier and use.

Better ways to find, stay in touch, and share with your gaming friends – We’re improving the ways you can stay in touch with friends on Xbox Live by making it easier to connect with people you care about on other social networks. We’re also adding updates to the Activity Feed, so you can connect and share more with your gaming friends. With additional improvements to Clubs and Looking For Group (LFG), like better moderator tools for Clubs and the ability to share LFG posts in your feed, we’re making it even easier to seek out players for any game on Xbox and Windows 10, and join communities of gamers like you.

You define the rules of competition – New tournaments are coming to Arena on Xbox Live, including those from professional tournament organizers like ESL and FACEIT. And starting with “World of Tanks” and “Killer Instinct”, you’ll be able to create your own Arena tournaments, with more supported titles coming over time. Once your tournament is created, you can invite your friends and members of your club can see it and join. And when the tournament ends, the results will be automatically recorded so you can share them on Xbox Live and across your social networks.

As part of the Creators Update, we’re just getting started. We have a few surprises on the horizon and more features to share with you soon. Get excited, stay tuned, and see you on Xbox Live!