For those occasions when zipping around in anything high-speed across the waters is not an option, here’s the Waterbuggy for a bare modicum of fun. Let’s better ’emphasize bare modicum: the Waterbuggy operates best in shallow waters just three feet deep at the most. Also, its modular engine complement powers it at an epic 10 km/h tops (yes, that’s sarcasm people). 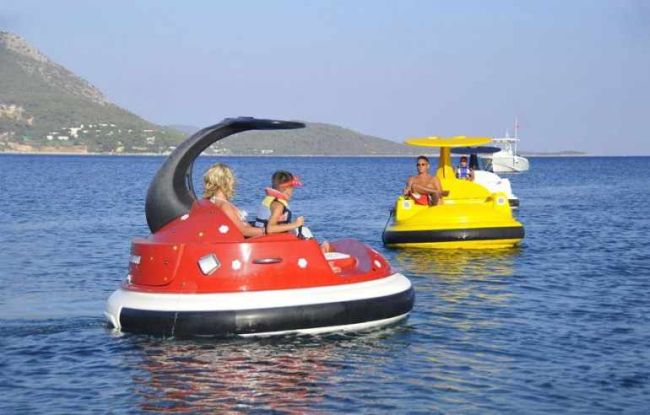 In short, the Waterbuggy is an easy to use, idiot-proof coastal craft for relatively safe ‘travelling’ near the shore. It’s clean family fun for kids and the ‘rents who don’t want to worry about hair-raising thrill.

Designed by a Turkish marine engineering firm, the single coolest aspect of the Waterbuggy aside from its sun roof are its interchangeable engines, which regrettably aren’t battery-powered. There’s even a detachable fuel compartment for on-shore refilling. The controls are also commendable, being so easy even a kid could manage to drive these machines.

The Waterbuggy shouldn’t be underestimated, however, since its design features and capabilities allow it work as an effective emergency craft or perhaps in some aquatic-industrial purpose. But this is just speculation on our part. Problem is it’s a little too slow for comfort. To date, the Waterbuggy is a leisure craft last seen in sunny Monaco.

Pretty boring? Not quite. it comes in different colors! It isn’t cheap either selling for around $10,000 per unit.