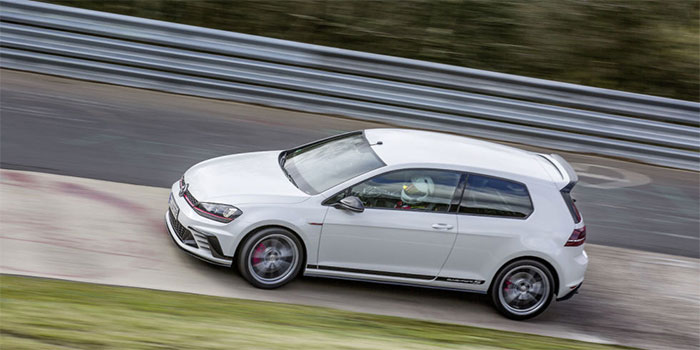 VW has officially sent Honda running when it destroyed the record Honda set for front wheel drive cars around the famous Nurburgring in Germany. Honda had scored the record with its Civic Type R and now VW has beat that record by 1.4 seconds landing in the top spot. The official time for the fastest FWD car around the Nurburgring is 7:49.21.

The car that VW used to beat the record was the GTI Clubsport S. One thing the Civic Type R has up on the Clubsport S is availability. VW plans to make only 400 GTI Clubsport S cars for the entire world and not a single one of them will be offered to US fans.

The Clubsport S makes 310hp and had weight cut to 2883 pounds. That weight savings comes in part thanks to ditching the rear seat and offering the car with a lighter manual transmission only. Tires on the car are very sticky Michelin Pilot Sport Cup 2. Europeans are lucky in the vast number of hopped up FWD hatch cars available to choose from. Check out the video of the GTI Clubsport S in action.