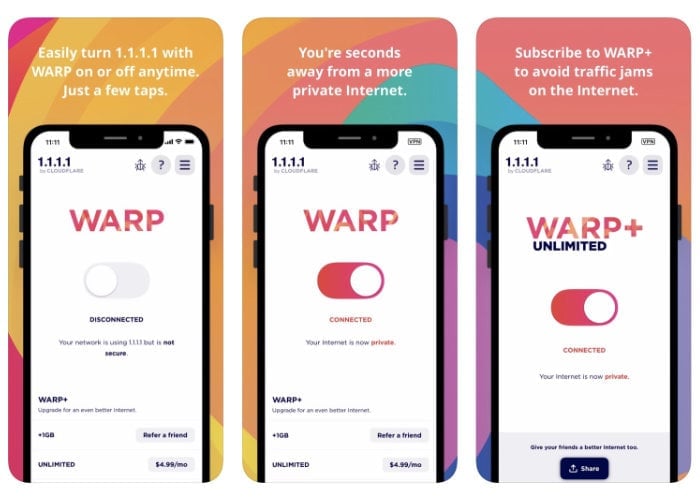 After previously announcing the new Cloudflare VPN service earlier this year during April 2019. Cloudflare has today announced the availability of its new WARP and WARP Plus applications to the vernal public, via the official Google Play and Apple App stores. WARP has been specifically designed your Internet more private and safer. “No one should be able to snoop on what you do on the Internet. We’ve created 1.1.1.1 so that you can connect to the Internet securely anytime, anywhere” says development team.

WARP Plus uses Cloudflare’s virtual private backbone, known as Argo, to achieve higher speeds and ensure your connection is encrypted across the long haul of the Internet. The Cloudflare VPN WARP applications experience a few delays along the way since its unveiling back in April and received more than 2 million registrations while under development.

“For people just signing up today, the basic WARP service is free without bandwidth caps or limitations. The unlimited version of WARP Plus is available for a monthly subscription fee. WARP Plus is the even faster version of WARP that you can optionally pay for. The fee for WARP Plus varies by region and is designed to approximate what a McDonald’s Big Mac would cost in the region. On iOS, the WARP Plus pricing as of the publication of this post is still being adjusted on a regional basis, but that should settle out in the next couple days.”

Features of the VPN app :

– A better way to connect – 1.1.1.1 with WARP replaces the connection between your phone and the Internet with a modern, optimised, protocol.
– Greater privacy – 1.1.1.1 with WARP prevents anyone from snooping on you by encrypting more of the traffic leaving your phone. We believe privacy is a right. We won’t sell your data.
– Easy to use – One-touch setup to make your Internet more safe and private. Install it today, get a more private Internet, it’s that simple.
– The only way to get WARP+ – We test thousands of paths over the Internet every second to find which have the best performance. Skip right past Internet traffic jams using the same technology that we use to make thousands of websites 30% faster (on average).

Subscription of the Pro VPN app :

– 1.1.1.1 with WARP is free, but WARP+ is a paid feature which can be enabled at any time.
– You can get free WARP+ data by sharing 1.1.1.1 with friends.
– Subscribe on a monthly basis to receive unlimited WARP+ data for the duration of the subscription.
– Your subscription will automatically renew for the same package length at the same price until you cancel in settings in the iTunes Store at least 24 hours prior to the end of the current period.
– Any unused portion of a free trial period and/or WARP+ data transfer credits, if offered, will be forfeited when you purchase a subscription, where applicable.