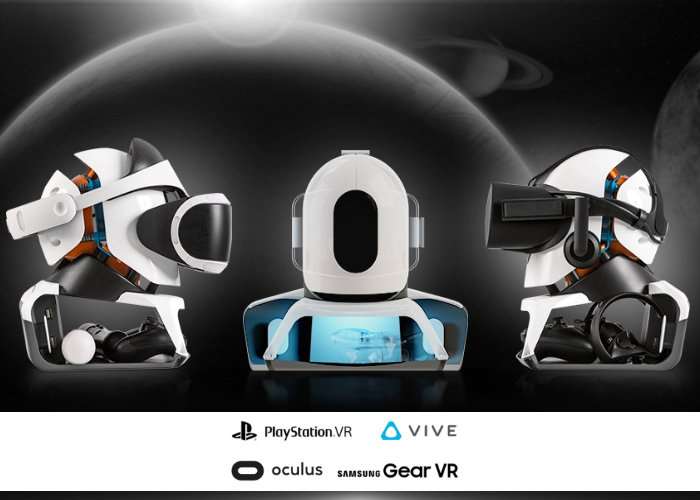 Storing your virtual reality headset when not in use from dust and damage can sometimes be a problem. If you are looking for a custom-made VR headset stand, the VOYA designed by Mark Date may be worth more investigation.

Designed to accommodate all the major virtual reality systems currently available including the Oculus Rift, HTC Vive, PlayStation VR and Samsung Gear VR, the VOYA is now available to back via Kickstarter with pledges available from just £50, $65 or €55 approximately.

If the Kickstarter campaign successfully raises £30,000 over the next 30 days delivery is expected to take place during April 2018. Watch the video below to learn more about the VOYA VR headset stand.

Mark the designer of VOYA explain marabout the inspiration behind the VR headset accessory.

Tired of your beloved VR kit becoming a tangled mess? I was too, that’s why I created the VOYA VR Headset stand. Sleek, streamlined and ultra high-tech, the VOYA offers the perfect fit for all VR headsets thanks to the clever design and intuitive aesthetics. The stand’s carefully calibrated adjustment system adapts to each headset brand for a snug fit – meaning it can be used with all major headset brands including Oculus Rift, HTC Vive, and PlayStation VR.

With VOYA there is no more battling to get your VR system in and out of the box or running the risk of expensive equipment becoming a tangled mess. For those who want to quickly embark on their next virtual adventure, the VOYA VR headset stand is the perfect accessory.

Jump over to Kickstarter for more details via the link below.