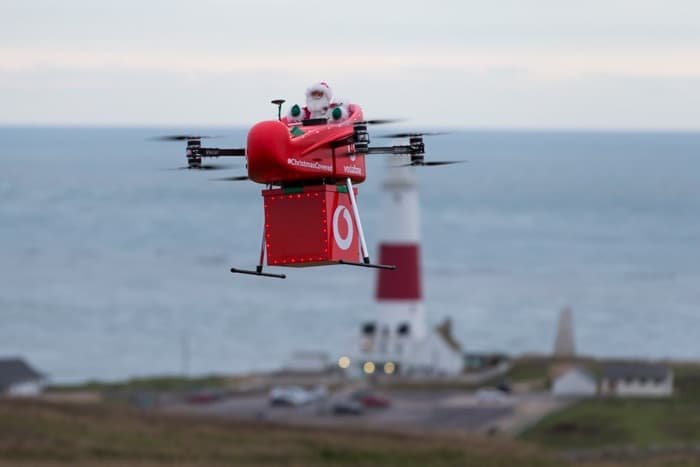 Vodafone has announced that it has made the first drone delivery in the UK using a 4G mobile network.

Drones are normally flown using a radio and not over 4G, you can see the drone in action in the video below.

The specially adapted drone was made to look like a twinkling Santa sleigh and carried festive treats.    It brought Christmas cheer to Portland Bill Coastwatch, which sits on one of the most southerly points of the UK and operates 365 days a year.  It is manned by 75 volunteers, known as Watch Keepers, who are the eyes and the ears of the coast.    The Watch Keepers complete over 9,500 hours of service each year and work closely with the emergency services to help save lives. Entirely exposed to the UK coast, the site can be hard to reach in winter months.  However, using Vodafone’s best ever 4G network, a delivery of much-needed mince pies, chocolate and gingerbread men was delivered to the hardworking volunteers.

You can find out more details about Vodafone and their 4G drone over at the companies website at the link below.