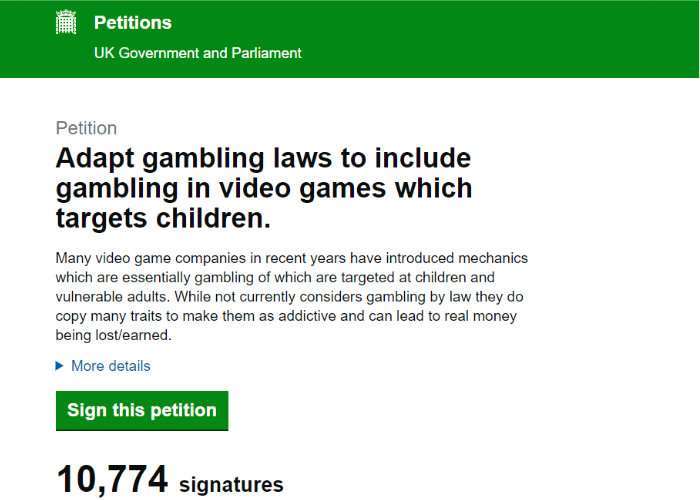 Further to the ongoing worldwide discussion as to whether loot box mechanisms within video games should be classed as gambling. A UK online petition has received more than 10,000 signatures, triggering a response from the UK government.

At 100,000 signatures, this petition will be considered for debate in Parliament. The petition entitled “adapt gambling laws to include gambling in video games which targets [sic] children” is calling for the government to change current gambling legislation to include loot boxes within the realm of “

Many video game companies in recent years have introduced mechanics which are essentially gambling of which are targeted at children and vulnerable adults. While not currently considers gambling by law they do copy many traits to make them as addictive and can lead to real money being lost/earned.

Gambling in video games mostly involves ‘loot boxes’ where players use virtual currency (often bought with real money) to earn in game items often worth less than what they paid (sometimes more) hence its gambling.
Currently only china has introduced new laws to force companies to display the odds of winning which had been standard in the uk gambling industry for years.

Check out the video created by the team over at Eurogamer to see one example of loot boxes and how they function within a video game.